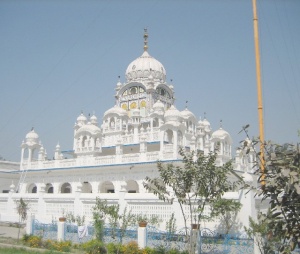 Gurdwara Antaryatma Sahib is situated in the Sultanpur Lodhi City of Kapurthala Distt.

The Muslims asked Guru Nanak Dev that whether He was Hindu's Guru or Muslim's ? Guru Nanak Dev replied that He is common to them. Then the Muslims said that in case you are common then come with us to offer Namaaz. Guru Ji went along. Everyone stood in the Mosque in order to offer Namaaz & started offering prayers but Guru Nanak Dev kept standing straight. After offering Namaaz, they asked with anger as to why didn't He offer prayers. Guru said that even you didn't offer prayers. Nawab said that they did offer prayers. Guru Ji said that your heart was away to get horses from Kandhar. You were physically present here & so was I, but not mentally. On hearing this Khan said that you should have offered prayers along with the priest. Guru Ji replied that even he was physically present here but his mind was taking care of the new born female calf at home which might not fall into the well. Then everybody bowed to Guru Ji's feet in adoration & said that he is a saint with divine powers.