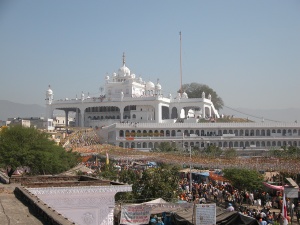 Gurdwara Shri Keshgarh Sahib is the main Gurdwara in Anandpur sahib and so is sometimes wrongly referred to as Gurdwara Anandpur Sahib. It is one of the five Takhats and a seat of authority for the Sikhs. This shrine is located in the center of the city of Anandpur Sahib. Many Gurdwaras are located within this locality. However, the main shrine is known as Takht Shri Keshgarh Sahib and it is the city's main shrine. The city began as Chakk Nanaki, which was founded by Guru Tegh Bahadur in 1665.

His son Guru Gobind Singh ji, who spent 25 years of his life in the city, added greatly to the city's size, giving it the new name of the City of Bliss (Anandpur). In fact, It was here that the Khalsa was born with the first initiation of Khande Di Pahul, when the young Guru called for a special congregation on the Baisakhi day of 1699 with thousands of Sikhs in attendance. One can only imagine how large the area was around Kesgarh Sahib then to accommodate the many thousands of Sikhs in attendance on that historic day.

Anandpur Sahib (the holy City of Bliss) is one of the holiest places of the Sikhs, second only to Amritsar. Located about 95kms north-west of Chandigarh. Anandpur is framed between the Shivalik hills to the east and the Sutlej River farther away in the west, with vast green expanses and profound tranquillity all around.

It is closely linked with Sikh religious traditions and history. The ninth Guru, Guru Teg Bahadur, purchased the site from the ruler of Bilaspur in the year 1665 and founded Anandpur Sahib near the ruins of ancient Makhowa. He called it Chak Nanki after the name of his mother. The town became prosperous and reached its zenith in the times of Guru Gobind Singh, who spent 25 years of his life here.

On March 30,1689 Guru Sahib laid the foundation of a new town and named it Anandpur Sahib. To Defend Anandpur from external threats, Guru Gobind Singh constructed five forts around the town and joined them with earthworks and underground tunnels. The construction began in 1689 and took over ten years to complete. It was here that Guru Gobind Singh baptised the first five Sikhs called the Panj Piares, the five beloved ones in 1699. The Panj Piare had offered him their heads to uphold Dharma, thus creating the nucleus of the Khalsa. Chak Nanki and Anandpur Sahib as well as some adjoining villages form the present city of Anandpur Sahib.