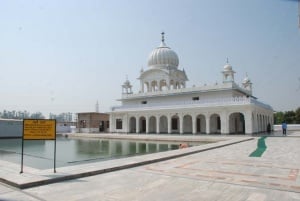 Gurdwara Akalgarh Sahib (Gharuan) is sacred to Guru Teg Bahadur Sahib ji, who visited the place during his travels in these parts. Several people accepted his teachings, establishing a Dhramshala in the village. Guru Tegh Bahadur Ji also is believed to have visited Gharuan, while on his way to Delhi in 1675. Guruji first went to the place inside the village commemorating the visit of Guru Har Rai, but not recognizing him, the priests treated him with indifference. Later Guruji returned, retiring to a quiet groove about 300 metres north of the village.

The villagers realizing their error came to make apologies. They requested Guruji to stay in Dhramshala, Guruji refused the request. According to another tradition Guruji came to this place and stayed for 10 days in 1670. A carpenter Balap Ram served him with much devotion. Shri Guru Teg Bahadur Sahib ji reached there in "Jeth mahina", so in every Jeth Mahina there is a big fair called the JOD MELA (JETH SUDI DASHMI), in which sangats come from abroad and all around and take a Ishnan in SAROVAR and do Five times SUKHMANI SAHIB paath.Now Jod Mela "Jeth Sudi Dashmi" is going to be held on 14 June 2016 (Tuesday), On 13 June 2016 there will be Kirtan Darbar/Kavishar Darbar which starts from 7:00pm till late night, On 14 June 2016 Kirtan will be performed by Bhai Lakhwinder Singh Ji (Hazoori Ragi). All Sangat is warmly invited.

Gurdwara Akalgarh Sahib is situated in village Gharuan on Chandigarh-Ludhiana Road. It is 6 kms. from Morinda and 9 kms. from Kharar