RICE REVOLUTION: HOW A SIKH HELPED FEED THE WORLD 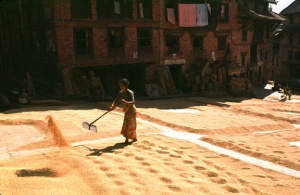 Dr. Gurdev Singh Khush may not be a household name, but the rice that he developed has touched the lips of nearly every person in the world. This humble man is a Sikh scientist who, through dedication and hard work, developed more than 300 varieties of rice and triggered the famed Green Revolution in Asia. These modern rice varieties helped avert a major catastrophe in recent world history. This catastrophe was an explosion in the world's population without an accompanying explosion in the world's food supply, of which rice is a predominant staple crop.

Because farmers adopted these modern varieties, the world's supply of rice doubled in just 25 years - from 257 million tons in 1966 to 520 million tons in 1990. What's more, most of the major rice-producing countries became self-sufficient. Massive starvation had been avoided. The major force behind this profound increase in the world's food supply was Dr. Gurdev Singh, a plant breeder and geneticist at the International Rice Institute in the Phillipinnes. About 70% of the world's rice fields are planted with varieties developed under his leadership.

That means, when you pass by or set foot in a rice field, anywhere in the world, chances are the variety you see was developed by a Sikh. 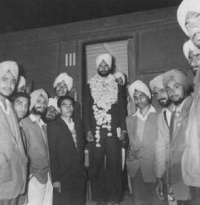 Dr. Singh was born in the Jalandhar district of Punjab, India. The eldest of four children, he grew up on a wheat farm and helped with plowing, sowing, tending, and harvesting. Considering his global effect on irrigated rice farming, his first memory is a significant one: making small fields and irrigating them with water from a small pit. The young Gurdev aspired to contribute to the betterment of society, and so he studied hard in school. Graduating as the valedictorian of his high school class was only the beginning of his high academic achievement. He performed well throughout his university career at what is now Punjab Agricultural University, graduating in 1955 with a degree in plant breeding.

After graduating, Gurdev decided to travel abroad in order to pursue further educational opportunities. It was not easy. He had to borrow money from his relatives to purchase an airline ticket to England, where he worked in a canning factory. Laboring for nearly two years, he saved up enough money to pay back his relatives and buy a plane ticket to the United States. He enrolled in the University of California, Davis, where he studied under the renowned geneticist Dr. G. Ledyard Stebbins. After earning his Ph.D., he stayed on for another seven years, researching the cytogenetics of tomatoes alongside Professor Charles M. Rick. Dr. Singh met his future wife for the first time during this period, with whom he was to have four children.

In 1967, Dr. Singh joined the International Rice Institute and has been at the forefront of improving rice varieties ever since. Prior to his work, rice took six to seven months to mature and yielded between one to two tons per hectare. Dr. Singh modified the plant by reducing its height, shortening the maturation time, and increasing its response to fertilizers. Under optimal conditions, the new plants can yield ten tons per hectare.

During his work, Dr. Singh visited 60 rice-growing countries, serving as a consultant in rice improvement programs in many of them. He also trained rice breeders from around the world, served as a professor for Master's and Ph.D. candidate students, and laid the groundwork for rice-breeding programs in many places.

During his career, Dr. Gurdev Singh has been one of the world's most decorated scientists as the recipient of numerous awards and honors, including the prestigious Japan Prize in 1987 from the Japan Center for Science and Technology, the Padma Shri Award in 2000 from India, and the Wolf Prize in 2000 from Israel. In 2001 the State Council of China awarded him the China International Scientific and Technological Cooperation Award at a ceremony in the Great Hall of the People in Beijing. He received the World Food Prize in 1996, the most prestigious international award in the field of agriculture. As a laureate of this award, he is recognized annually on the United Nations' World Food Day. The World Food Prize organization comments:

Dr. Singh's work has resulted in an increase in rice that feeds 700 million more people than would have been possible with traditional varieties, and provides an additional $1 billion in income to poor farmers. The increased availability of rice has also lowered costs to consumers and enhanced the nutrition of millions of people. Caloric intake in almost all rice-consuming nations has improved. For example, caloric intake in Indonesia increased from just 81% of the daily requirement to 120%, a jump of 50% over previous levels. And all of this happened while the population of rice consumers was growing annually, and the availability of rice production land remained constant.

Dr. Gurdev Singh has been elected to the Indian National Science Academy, The Royal Society, and the U.S. National Academy of Sciences, and has received honorary doctorates from eight universities, including Cambridge. He currently serves as a professor in the United States.

A press update from the World Food Prize

Dr. Khush has received honorary doctorates from ten universities, including a 2000 doctorate from Cambridge and a 2007 doctorate from Guru Nanak Dev University in India; he has been inducted into national academies in countries including China, India, Russia, and the United States and has been honored by fifteen other nations across the globe. In 2007 Dr. Khush was awarded the Golden Sickle Award, honoring researchers who have made a considerable contribution or accomplishment in rice research. In addition, Dr. Khush has also been awarded the 2001 International Scientific and Technological Cooperation Award from the Government of China, the Padma Shri award from president of India in 2001, and the 2000 Wolf Prize in Agriculture.

Today in 2008 Will science only be the answer?

With the current rise in oil prices (and record gasoline prices as well) and the ever expanding population around the World, food shortages and rice hoarding are once again pushing the need for scientists like Dr. Singh.