From SikhiWiki
(Redirected from Ghadar Party)
Jump to navigationJump to search 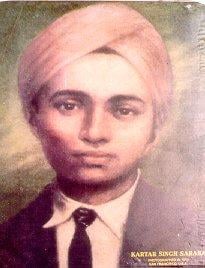 On April 21,1913, the Indians of California assembled and formed the Ghadar Party (Revolution Party). The aim of the Ghadar Party was to get rid of the slavery caused by the British for the people of India. The British had been ruling India as a colony of the British Empire for over 100 years.

The Ghadar Party's aim was to rid of the colonial super-power by means of an armed struggle and to set up a national democratic government on the sub-continent. Their slogan was "Put at stake everything for the freedom of the country." On the November 1, 1913, the Ghadar Party started printing a paper named 'Ghadar', which was published in the Punjabi, Hindi, Urdu, Bengali, Gujarati and Pushto languages. Kartar Singh Sarabha did all the work for that paper.

This paper was sent to Indians living in all countries throughout the world. The purpose of the paper was to unmask the ugly truth about British rule to all Indians, impart military training to volunteers, and explain in details the methods of making and using weapons and explosives. Within a short time, the Ghadar Party became very famous through its organ: 'The Ghadar". It drew Indians from all walks of life.

Kartar Singh Sarabha began his involvement in the Gadar Party in San Francisco in 1912. Sarabha was born in India in the year 1896. After his graduation from high school in 1911, he arrived at the University of California-Berkeley to continue his studies in engineering. In Berkeley, he joined the Gadar party in 1913. Around this time, he also learned how to fly. He returned to India in 1914 to fight for his country's independence. On November 16th, 1915, Sarabha was hanged at the tender age of 19.

Sarabha was born into a Grewal Jat Sikh family at village Sarabha in the district of Ludhiana, Punjab in 1896. His father's name was Sardar Mangal Singh. When he was fifteen, his parents put him on board a ship for America to work there. The ship landed at the American port of San Francisco in January 1912. The American Immigration officer put Indians through rigorous questioning while people of other countries were allowed to pass after slight checks. Kartar Singh asked one of the passengers about this type of behavior. He told him, "Indians are the citizens of a slave country. As such, they are treated badly." This incident had a great effect on Sarabha.

In 1914, Indians worked in foreign countries either as indentured labourers or soldiers fighting for the consolidation of British rule or extending the boundaries of the British Empire. Kartar enrolled at the University of California at Berekely(UCB) and also took up the work of picking fruit in orchards. He frequently talked to other Indians about getting his country freed.

The Ghadar Party and Newspaper

"In the early months of World War I, an ambitious attempt to free their country was made by Indians living overseas - particularly in the United States and Canada. Although the overwhelming majority of the Ghadarites were Sikh and the centres of revolutionary activity were the Sikh temples in Canada, the United States, Shanghai, Hong Kong, and Singapore, many of the leaders were of other parties and from different parts of India - Har Dyal, Rash Bihari Bose, Barakatullah, Seth Husain Rahim, Tarak Nath Das and Vishnu Ganesh Pingley. A few of these Gadarites are alive today: Sohan Singh Bhakna and Bhagwan Singh in the Punjab; Gobind Bihari Lal in Los Angeles; others in different parts of the world, living in obscurity. The Ghadr was the first organised violent bid for freedom after the rising of 1857. Many hundreds paid the price with their lives."