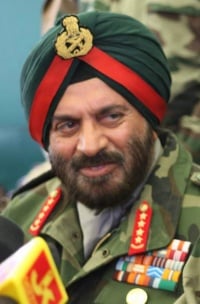 General Joginder Jaswant Singh (b. 17 September 1945) is the first Sikh Chief of Army Staff of India.

He was named as the 22nd Chief of Army Staff on November 27, 2004 and took over the role when his predecessor General N C Vij retired on 31 January 2005. He is the first Sikh to lead the Indian Army and the 11th Chief of Army Staff from the Western Command based at Chandigarh. His selection was not a surprise as at the time of his appointment he was the most senior officer in the army after General Vij.

He is an alumnus of the National Defence Academy and was commissioned into the 9 Maratha Light Infantry on 02 August 1964.

General Joginder Jaswant Singh assumed charge of the Indian Army, as the 22nd Chief of Army Staff, on 31 January 2005. He is an alumnus of the National Defence Academy and was commissioned into the 9 Maratha Light Infantry on 02 August 1964. He received the colour of the Battalion from President (Late) Dr. Zakir Hussain at the Investiture Parade in 1968.

Hailing from a family of warriors, he is a third generation soldier. Born on 17 September 1945 in Bahawalpur (now in Pakistan), his family migrated to India (Patiala, Punjab) after partition in 1947. His grandfather served in the 1/67 Punjab Regiment during the First World War in Mesopotamia and Kut-al-Amara - both in present day Iraq - along with the 103rd, 105th, 110th, 114th and 117th Mahrattas. These five battalions subsequently joined the Maratha Light Infantry, the same regiment General Singh was commissioned into 50 years later. His father, Colonel Jaswant Singh Marwah, served in the Electrical & Mechanical Engineers from 1943 to 1973 and is also a veteran of the Second World War.

During his tenure with the 7th and 9th Maratha LI and also while on higher command & staff appointments, General Singh has served in Jammu & Kashmir, Nagaland, Arunachal Pradesh, Sikkim and Joshimath in Uttranchal Pradesh. He was awarded the Vishisht Seva Medal during his command tenure of the 9 Maratha Light Infantry in Arunachal Pradesh. He later commanded the 5th Maratha LI at Hyderabad in the rank of Colonel. A consistent front runner, he was the youngest and one of the first in his batch to attend Staff College, Senior Command, Higher Command and National Defence College courses. He has contributed articles for regimental and other professional journals and his thesis on 'Sino-Indian Border Dispute' and 'Strategy to Boost Defence Exports' have been highly acclaimed. He has the honour of being India's first Defence Attaché to Algeria (1987 - 1990).

After returning from Algeria, General Singh successfully commanded the 79th (Independent) Mountain Brigade in the Baramula Sector, Jammu & Kashmir, during the peak of insurgency there in 1991-92. During this tenure, he was gravely wounded in action leading from the front, in a fierce engagement with terrorists infiltrating across the Line of Control (LoC). For that operation, he received the War Wound Medal and was awarded the Chief of Army Staff's Commendation. He was nominated to attend the prestigious National Defence College (NDC) course in 1993. He was posted as Deputy Director General Operational Logistics in Army HQ after the NDC Course and later commanded the 9th Infantry Division from 1996 to 1998.

General Singh was then selected for a key appointment as the Additional Director General Military Operations (ADGMO) at Army HQ, Military Operations Directorate. During his tenure as ADGMO, he contributed positively towards evolving India's policy on the Sino-Indian border issue and visited Beijing as part of the Joint Working Group. He was also part of the Ministry of Defence team for talks with Pakistan on the Siachen and Sir Creek issue in 1998. He also visited Sierra Leone with the Defence Minister, where an Indian contingent carried out successful operations as part of the UN Mission. As the ADGMO, he became the Indian Army's public face during the 1999 Kargil conflict. He was decorated with the Ati Vishisht Seva Medal in recognition of his services in the planning and execution of the war.

General Singh assumed command of the elite 1 'Strike' Corps at Mathura. He successfully coordinated the corps level exercise - Poorna Vijay - in May 2001 in the deserts of Rajasthan. He subsequently led 1 Corps during Operation Parakram - the military standoff against Pakistan - from December 2001 to December 2002. He was then appointed as the General Officer Commanding-in-Chief of the Army Training Command in January 2003, where he was credited with drafting a new doctrine for the Indian Army. He was instrumental in giving the Command a distinctly discernable and widely appreciated thrust towards modernisation. After his stint at ARTRAC he stated, "Every assignment has its own importance, but the one at ARTRAC, the think-tank of the Army, has been quite different as it plays a crucial role in preparing the Army for future challenges in a constantly changing battlefield milieu. The responsibility involved development of new concepts and doctrines at the strategic and operational levels for the emerging security environment, besides framing of the training policy and providing training support to the Army in all its facets." He was awarded the Param Vishisht Seva Medal (PVSM) on 26 January 2004 for his distinguished services of the highest order.

General Singh took over as the GOC-in-C Western Command on 01 February 2004 and his tenure at this elite Command, provided an opportunity to put into practice the concepts & doctrines evolved at ARTRAC and he refined operational planning by co-opting the battle winning role of Revolution in Military Affairs (RMA) and provided focused direction based on the recently released 'Doctrine for the Indian Army' having earlier been its architect. He simultaneously gave training a visionary direction in conjunction with principles of synergetic cohesiveness at all levels. His tenure at Western Command also saw a quantum leap in the implementation of the Ex-servicemen Contributory Health Scheme (ECHS). He was also appointed as Honorary Aide-de-Camp (ADC) to the President of India on 01 February 2004.

On assuming the office of the Chief of Army Staff on 01 February 2005, General Singh stated in a message, "We stand poised at a critical juncture in the timeline of history. Having left behind us the vagaries of the past, we purposefully stride towards economic growth, social harmony, peace and prosperity. Simultaneously and seamlessly, we are also making the transition to a highly motivated and modern Army, driven by the engines of high technology and Revolution in Military Affairs. I assure our countrymen that the Army will remain at the service of the nation, at all times, ready and eager to take on any challenge with determination and resolve to emerge victorious." He is widely considered to be a thinking soldier and is a through professional.

Affectionately known as General JJ within army circles, he was appointed Colonel of the Maratha Light Infantry on 10 October 2001. He is an ace shooter and plays basketball, squash and golf. He is also a keen mountaineer who has trained under the late Tenzing Norgay at Himalayan Mountaineering Institute, Darjeeling. He is married to Mrs Anupam Singh and they have a son and a daughter. He is fluent in both Arabic and French, the widely spoken languages in Algeria. Lieut-General Joginder Jaswant Singh (55) is the first Sikh officer to become the Chief of the Indian Army Staff on Februart 1st 2004.

Though the Sikhs have formed the bulwark of the Indian Army since its inception, this is the first time that a Sikh officer has been named to the top post.

General J.J. Singh immediately after appointment has said," It a great privilege and "matter of justifiable pride to be appointed as the Chief of Army Staff of the world's second-largest army and one which is considered amongst the highly professional and experienced armies".

Born in Bhawalpur in Pakistan on September 17, 1945, General J.J. Singh has a rare distinction of having commanded the Chandimandir-based Western Army Command as well as the Army Training Command.

In his operational role, the new Army chief commanded Mountain Brigade in Baramulla in Jammu and Kashmir, a division in the Western Sector and one of the three strike corps of the Army. He has also been a Defence Attache in Indian Embassy in Algeria.