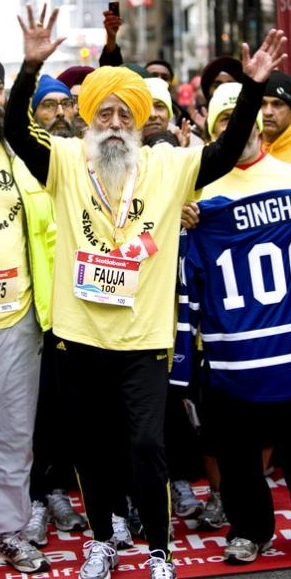 Fauja Singh (born April 1, 1911) is a Sikh marathon runner who is now over 100 year old. He is originally from India but has lived in the UK since 1992. He is a world-record holder in his age bracket in various sporting categories. He is Britain's most popular Sikh in his 100's. He has set various marathon records in the over 90's and over 100's categories. In 2004, he was featured in an advertising campaign for sportswear manufacturer Adidas.

In October 2011, Fauja Singh travelled to Canada to run in the Scotiabank Toronto Waterfront Marathon. As preparation for the marathon, on Thursday, October 13, 2011, he ran eight world record times for his age group in less than five hours at Scarborough’s Birchmount Stadium track in Toronto (Ontario, Canada), from distances as short as 100 metres to as long as 5,000 metres.

These are the races in which he broke the world record:

Following this record breaking day, Fauja Singh went on to secure a spot in the Guinness World Book of Records on Sunday, October 16, 2011, at the Scotiabank Toronto Waterfront Marathon when he achieved his dream - becoming the world record holder of the marathon aged 100 years.

The 100-year-old managed to accomplished this amazing feat, completing the gruelling 42.195 kilometre marathon and becoming the oldest person ever to complete a full-distance marathon. 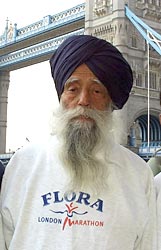 Fauja Singh came to London in 1992 to live with his son after his wife's death in his village in Jalandhar. "Sitting at home was really killing", he says in Punjabi. "Most elderly people in Britain eat a rich diet, don't move about and only travel in cars, and that makes them sick", he says. He wasn't prepared to go the same way. So he took up jogging initially to beat the boredom of sitting at home.

"I never thought of running a Marathon then. But slowly it grew". What surprises many is that he supports his eight stone and six feet tall body frame with a very simple vegetarian diet. "I am very careful about different foods. My diet is simple phulka (chappati), dal (lentils), green vegetables, yoghurt and milk. I do not touch parathas, pakoras, rice or any other fried food. I take lots of water and tea with ginger."

And that smile is eternally fixed beneath his silver haired beard. Perhaps that's the reason behind his strikingly inspiring and positive attitude. "I go to bed early taking the name of my Rabba [God] as I don't want all those negative thoughts crossing my mind." Doesn't he find it difficult to cover 26 miles at this age? "The first 20 miles are not difficult. As for last six miles, I run while talking to God".

While running Marathon races in London, New York, Toronto, India, etc he has raised thousands of pounds for various charities promoting Sikh culture around the world. He has also raised money for B.L.I.S.S., a charity dedicated to the care for premature babies. He describes it as the 'oldest running for the youngest'. 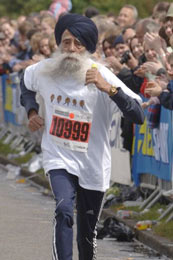 Fauja Singh shot to fame in 2000, when aged 89, he completed the gruelling 26.2 mile (about 42 km) distance in 6 hours and 54 minutes. This knocked 58 minutes off the previous world best for anyone in the 90 plus age bracket. The career of this extraordinary marathon runner is closely supervised by his personal trainer Harminder Singh. He says "He can still run for a few more years. And perhaps in five years he might be the oldest man to run a Marathon.'"

In 2004, Adidas signed him up for its 'Nothing Is Impossible' advertising campaign. He won't reveal how much money the deal involves, but says that a large part of his earnings went to charity.

But the question is how long can he continue to run marathons. Steven Carroll, an expert in sports medicine says that Fauja Singh should go on running for as long as he likes, provided his cardiovascular system is able to support his gruelling schedule. But, he cautioned: "No one should run a marathon, be they 16 or 93, without getting properly fit first. A marathon is a punishing event and anyone thinking of entering must build up endurance".

On the Friday, April 16, 2004 just before the 2004 London Marathon, Fauja Singh had to go through his final medical test. "They had all types of machines and took many tests. Everything is fine with me. Though my one leg is weaker than the other, I can complete the run", he says with a disarming smile. That's why the Adidas billboard warns the Marathon runners from Kenya: "The Kenyans had better watch out for him when he hits 100". 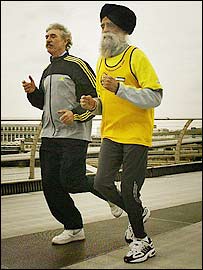 At 94, he's run seven marathons (five in London), countless half-marathons and was recently part of the world's oldest marathon team in Edinburgh.

Fauja's jogging skills were developed on an Indian farm in Punjab, and then at the magical age of 81, when he moved to the UK, his love for the sport became more "serious".

Next up? He's set his sights on being a record breaker.

And Asafa Powell might have to watch his back. The Jamaican may have the new 100m record, but Fauja's after eight of them - in one day.

The action starts at 10:30BST with proceeds going to charity and the event is in support of the London 2012 Olympic bid.

So any secrets to fitness? Fauja's training regime includes a daily eight-mile walk and run, no smoking or drinking, plenty of smiling and lashings of ginger curry.

The pounding pensioner is already a superstar. Last year Adidas signed up Fauja alongside David Beckham and Jonny Wilkinson as part of its 'Impossible is nothing' campaign.

More marathons - and coach Harminder Singh is trying to set up a showdown between Fauja and Japan's Kozo Haraguchi - the new 100m world record holder for the 95-99 age group.

AT THE age of 97, Fauja Singh is an unlikely poster boy in the battle to encourage people to take more exercise. But as he crossed the finish line after a 10km race in Glasgow yesterday, he issued a rallying call to couch potatoes and gym-dodgers nationwide: "If I can do it, anyone can do it."

After crossing the line, Mr Singh, who took up the sport aged 89, joked: "It was a walk in the park."

Along with a group of runners from the Scottish Sikhs, Mr Singh completed the 10km event in 76 minutes and 14 seconds.

A vegetarian and a teetotaller who lives in London, he said the key to his success was positive thinking. He added: "It is good for your health. It allows me to focus on the positive and run away from people who are not positive and it doesn't cost anything."

Mr Singh, who has completed seven marathons, was joined by 78-year-old Amrik Singh from the East End of Glasgow.

He has competed in more than 500 races since starting to run competitively in 1984, and said he had no intention of stopping now.

"I run ten miles every other day and run shorter distances the days in between," he said. "Seventeen members of my extended family are also runners so I have helped encourage them and hopefully other people as well."

Yesterday's half-marathon was won by Emmanuel Mutai from Kenya in a time of one hour, one minute and ten seconds.

The women's race was won by Wokknesh Tula of Ethiopia at one hour 11 minutes.

The fastest Scot was Robert Russell, from Auchterarder, who crossed the line in one hour, five minutes and 22 seconds.

The men's 10km was won by Murray Strain from East Lothian with a time of 32 minutes and 22 seconds, with Lindsay MacNeill of Renfrew the fastest woman at 35 minutes and 53 seconds.

Who is the World’s Oldest Marathon Runner? 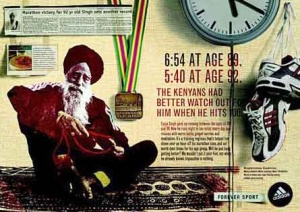 Who Is The World’s Oldest Champion Marathon Runner?

(This information about Bhai* Fauja Singh is from 2005) - at 94 years old, Fauja is regularly spotted flying down the streets of Ilford, Essex in his spikes. Why?

At 94, 5 ft 11 inches and about 116 pounds, he’s run at least seven marathons, countless half-marathons and Fauja was recently part of the world’s oldest marathon team in Edinburgh, Scotland where the team’s combined age for the four runners was 397 years!

Fauja was honoured as the “starter” for the race. Their turban-charged, 4 Sikhs relay-team placed 730 out of 912 teams.

Bhai Fauja developed his jogging skills on a farm in Punjab, India and then, at the magical age of 81, when he moved to England, he found his love for the sport became more “serious”.

What’s next? He set his sights on being a record breaker.

“He is an inspiration because he has set five UK records. He has achieved more in one day than an athlete normally does in a lifetime,” said Bridget Cushen, Secretary, British Masters Athletic Federation. “If that wasn’t enough, he attempted all the records in under 94 minutes.”

And, he still officially holds the Marathon World Record for his age 90+ group, set in Toronto September 2003, at 5 hours 40 minutes 01 second. He races for Great Britain.

“Fauja” is the Sikh name meaning “Army General” and he is true to his proud roots as the Sikhs are famous for their military prowess. They turn marvelous skill to peaceful activities, too, and many are great athletes.

He is 180 per cent fitter than an average man of his age, with a bone density in his left leg of a 50-year-old and a “20-year-old’s right leg”. He walks or runs 7 to 10 miles every day and has a training session with his coach once a week, although, he confesses, “When I am tired I do use my bus pass.”

Bhai Sahib also is a great Humanitarian, and all of his Adidas sponsorship money is given to charity.

He also ran one of his 5 London Marathons for the British Heart Foundation and Bliss, a premature baby charity. Bhai Fauja said, “I think that it is a good thing for the oldest runner in the race to run for the youngest people in our world.”

What a wonderful sentiment!

Fauja also is very aware about being a role model, and it is inspirational for young Sikh’s the world over, to see their proud military heritage, ability and training can be transformed into other healthy past-times, too.

Fauja Singh hopes to return in 2009 to break the record for the oldest marathon runner - presently held by a 98-year-old Greek athlete.