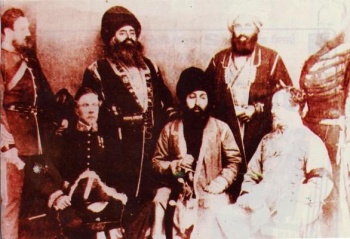 A picture said to be that of Maharaja Ranjit Singh (centre). However, historians have refuted this claim and hold it to be doctored

Fakir Azizuddin was a Muslim chief minister in Maharaja Ranjit Singh's government dealing with primarily with the "foreign ministry" although he had over time dealt with other departments like revenue collection, etc. Ranjit Singh (1780-1839) who was a Sikh ruled Punjab from about 1799 until his death in 1839. During his rule he appointed many non-Sikhs to his government - His was a secular government unlike his predecessors, the Mughal emperors. Fakir Azizuddin was a prominent and senior member of this team and he served in government with his two other brothers. It is recorded that he was a Punjabi Muslim and was one of the Maharaja's most favourite ministers; they often took afternoon walks together through Lahore.

The majority of Ranjit Singh's subjects were Muslim and had an intense loyalty towards him and his Sikh's. This was once highlighted when Fakir Azizuddin, had a meeting with the British Governor-General. When George Eden, 1st Earl of Auckland asked Fakir Azizuddin which of the Maharaja's eye was missing, he replied: "the Maharaja is like the sun and sun has only one eye. The splendour and luminosity of his single eye is so much that I have never dared to look at his other eye."