From SikhiWiki
(Redirected from Dupatta)
Jump to navigationJump to search 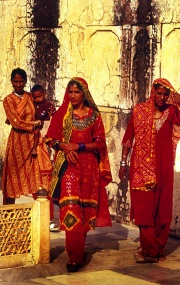 A Chunni or Dupatta is a long scarf that is essential to many Indian and South Asian women's suits. In the Sikh culture, the chunni has been as essential to the woman as the turban (pagri or Dastar ਦਸਤਾਰ) has been to the man. Historically, woman in the Punjab region have always worn this garment and covered their head as a sign of respect and modesty. Most woman used to cover their head when among elders of both genders.

Some "dupatta suits" include the salwar kameez, the trouser suit, and the kurta. The chunni has long been a symbol of modesty in Indian dress. It traditionally is worn across both shoulders. However, the dupatta can also be worn like a cape around the entire torso. The material for the dupatta varies according to the suit: cotton, georgette, silk, chiffon, ect. The other names for dupatta are chunn and chunni (sometimes shortened to 'unni' by many Gujaratis).

Although traditionally the chunni was a garment that was always used to cover the woman's head, the modern use of the dupatta has definitely undergone a metamorphosis in current fashions. Today the dupatta is frequently draped over one shoulder, and even over just the arms. Another recent trend is the short dupatta often seen with kurtas and Indo-Western clothing. Essentially, the dupatta is often treated as an accessory in current urban fashion. Nevertheless, the dupatta remains an integral part of Indian and Pakistani clothing.