From SikhiWiki
(Redirected from Bibi Kaulan)
Jump to navigationJump to search 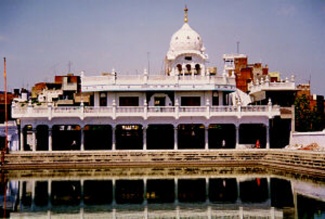 She had been kidnapped by a Muslim priest of the court called Qazi Rustam Khan. He was based in Lahore, Pakistan. Qazi Rustam Khan had stolen her from her Hindu parents while she was a child. The Qazi gave her the education of Islam and sent her to Saint Mian Mir for higher schooling.

Saint Mian Mir was a Sufi saint. He had no prejudice against any religion. He had a very deep love with Guru Nanak's Institution. It was usual for him to go to Amritsar to meet the Guru Arjan Dev ji. Whenever the Guru visited Lahore, he never went back without seeing Saint Mian Mir. Due to these meetings, Saint Mian Mir knew a large number of Guru's verses by heart which he used to quote to his disciples.

Bibi Kaulan also remembered some of the verses by heart which she used to recite herself as she found them very touching and allowed her to relate to God. Her attachment to the Guru's institution increased further when she saw the Guru Hargobind and the Sikhs came from Amritsar to Lahore at the time of the plague epidemic and nursed the patients with their own hands. The dedication of the Sikhs to serve God was something that impressed Kaulan ji as she too was a disciple of the true Guru.

Mata Kaulan Jee was imprisoned in the house of the Qazi and forced to do unthinkable things. The Qazi kept Mata Kaulan Jee under the pretense that she was his adopted daughter but the truth was very different and he did not treat her as a daughter at all. She was beaten and tortured very badly and was regularly abused.

One day, upon learning that Guru Hargobind Sahib Ji was camped with the Sangat nearby she pleaded with the maid servant to deliver a letter to the Guru. The maid servant agreed and Guru Jee received a letter of plea from Mata Kaulan detailing the atrocities committed by the so religious Qazi. She believed she would die soon from the abuse and had no means to escape. As the Guru's would never turn down a genuine plea for help, Guru Hargobind Sahib Ji made immediate plans to rescue Mata Kaulan Jee from her living hell. He instructed the maid to let Mata Kaulan Ji know that he would come near the house but she must escape the house herself and wait for Him outside. Once she had left the house of her own free will it was then the Guru's job to protect her always.

Guru Hargobind Sahib Jee prepared his horse and made the journey with five Sikhs to the Qazi's house in Lahore. As Guru Jee approached Mata Kaulan Jee was waiting, having climbed out of the top window with the help of the maid servant. Guru Jee rescued Mata Kaulan Jee from the Qazi's clutches and took her back to Sri Harimandir Sahib in Amritsar where the Sangat nursed her back to health.

Guru Hargobind took over the role of her spiritual guidance from Mian Mir. Under the Guru's guidance, Mata Kaulan was free to meditate and sing the Bani of the Gurus that she had refused to abandon even after the qazi had threatened her with death. Guru Hargobind Sahib Jee instructed some of his Sikhs to construct a building to serve as her living quarters, next to a pond beyond the Harmandir Sahib. He told her not to worry, that she could spend her time as she pleased. Even before leaving Lahore, Kaulan had spent hours in deep meditation and prayer often singing the hymns of Guru Nanak.

In her new home in the Guru’s court, she continued her routine of study and meditation. It is said that when Guru Hargobind saw her continual contemplation on the Divine, he was deeply pleased with her devotion. In order to protect that devotion and give it shelter, so it could flourish, he took care of her completely. Soon the devotion of the Guru's new charge, earned the respect of the Guru's Sikhs, who took to calling her Mata Kaulan.

Three years after the completion of the tank in Amritsar, Kaulan became ill. Ever her Protector, Guru Hargobind came to see her regularly. She was so weak, she could hardly speak. Guru Hargobind could see that she had only another day to live – another 24 hours. As she lay there, weak in body, with little voice, he took her through the experience of her life. How lucky she was, it is reported he said, that she left the company of people who had no sense to see the Divine.

How fortunate that she had come into the company of the Guru and the Sikhs to meditate and pray. With his compassion, he guided her to assess her life and see that there was no reason to feel pain about leaving her family – but only joy at how her life had been transformed.

Then, he began to give her spiritual instructions that would guide her through the last 24 hours of her life. He directed her to keep meditating and reflecting on the Akal Moorat – on the deathless spirit that lived within her. Death could not touch her spirit, her awareness – it was only an illusion. For the next 24 hours, the Guru instructed, she should do nothing but meditate on the Creator, and stay present with that Deathless Awareness inside of herself. He promised that he would come at the moment of her departure.

Twenty-four hours later, as he had promised, Guru Hargobind returned to Kaulan’s side. Macauliffe’s account of Kaulan’s last moment is very precise and very moving; so let me just share with you what he wrote.

“The Guru proceeded to Kaulan’s apartments and addressed her consolatory words. ‘Be ready. Prepare thyself. Thine hour hath come. Dismiss all consideration for thy body and fix thine attention on God, who is unborn and imperishable. The world is unreal and only shineth with His light. The soul is pure, real, conscious, happy. As long as man is proud of his body he is subject to birth and death. But when he hath obtained divine knowledge and passed beyond the bounds of love and hate, then he obtaineth deliverance.’

When Kaulan, after meditating on the Guru’s instruction, again opened her eyes, she addressed her last words to the Guru. ‘I thank thee! I thank thee! O patron of the homeless that I found shelter in thee. Thou didst in a moment confer on me the position which Jogis for years vainly strive to attain. Thou didst dispel the ignorance which hung over my millions of births like an inveterate disease.’ She then fixed her attention on God, repeated ‘Waheguru,’ and heaving her last breath departed to the heaven of her aspirations.

The Guru ordered her maids and manservant to prepare her for the last rites. Her maids bathed her and clothed her in a shroud and costly shawl. While the minstrel sang the Guru’s hymns, her body was removed to the garden attached to her dwelling and there cremated. The Sohila was read and prayers offered for the repose of her soul.” (2)

To immortalize the memory of Bibi Kaulan's resolve to remain firm on her words, the Guru constructed a pool named Kaulsar in 1627 A.D. Bibi Kaulan died at Kartarpur in 1630 A.D.

Tribune News Service Amritsar, March 27 The item below from: www.tribuneindia.com

The kar seva of the first-ever sarovar named after a Muslim woman, Mata Kaulan, adjoining the Golden Temple, will start next week.

Significance of Gurdwara Mata Kaulan and Kaulsar sarovar could be adjudged from the fact that Guru Hargobind, the sixth Sikh guru, had directed the devotees to take dip in Kaulsar before the Golden Temple sarovar. Now the sarovar at Gurdwara Kaulsar would also get filtered water as both the gurdwaras receive water from the common source.

The second phase of the kar seva of the Golden Temple and Kaulsar “sarovar’s would be launched simultaneously. The kar seva of Kaulsar is being undertaken after a gap of three decades.

Mata Kaulan, against whom qazi had pronounced death sentence for showing devotion to Sikh gurus, was brought here discreetly by Sain Mian Mir who had laid the foundation stone of the Golden Temple. Mata Kaulan, who was allotted a special place near the Golden Temple and Baba Atal, spent her entire life there before breathing her last at Kartarpur.

Excavation of Kaulsar was started in 1624 AD which was completed in 1627 AD under the supervision of Baba Budhaji, first head granthi of the Golden Temple.

Baba Amrik Singh, a representative of Baba Jagtar Singh of kar sewa wale, said kar seva of Kaulsar and second phase of the Golden Temple sarvovar would be completed in less than 24 hours after start of the de-silting operation scheduled for next week.

Meanwhile, fish of the sarovar of the Golden Temple had been transferred to the sarovars of Gurdwara Bibeksar and Gurdwara Ramsar, paving the way for launching of the second phase of kar seva.

Kaulsar is one of the five holy tanks of Amritsar city including Santokhsar, Bibeksar, Ramsar and Amritsar, the Golden Temple.

The process for installing filtration plant at the cost of Rs 5 crore started today. Mr Ranjit Singh Tut from the USA said laying of pipes for filtration plant would be completed before the starting of second phase of kar seva.