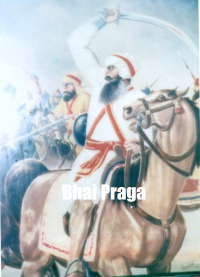 Bhai Praga or (Prag Das), who attained Shaheedi (martyrdom) on the 3 October 1621, was one of the first group of Sikhs to attain martyrdom in the battle of Ruhela, against the forces brought in by Bhagwan Das Kherar and Karam Chand, son of Chandu Khatri.

Bhai Prag Das, the son of Bhai Gautam, belonged to Mohyal Brahmin family. Bhai Gautam was initiated into the Sikh community, at the time of Guru Nanak Sahib. He had met Guru Nanak while Guruji was on one of his’ udasis (travels). Guru Sahib had granted him a ”Manji ”, and Bhai Sahib did lots of preaching of Guru Nanak's teachings in the area of Pathohar. (A memorial in memory of Bhai Gautam was erected at Khariala village, (Pakistan).

When Guru Hargobind Sahib created the Sikh army, Bhai Praga joined the force along with many of his fellow Sikhs. When Guru Sahib divided this force into five units each under one Jathedar, Bhai Praga became one of the five Jathedars. He gave great teachings to the Sikh army. On the day of 27th september 1621, when Bhagwan Das Kherar and Karam Chand attacked Ruhela, Bhai Praga fought at the battle fronts, and in the close-confrontations, he gave severe blows to the attacking forces. At last, the attackers, who had lost many of their comrades, had to leave the battlefield and accept defeat.

After six days, Chandu Khatri and the Royal Mughal army attacked once again. On 3rd october 1621, Bhai Praga fought with great courage and finishing the enemies, he also attained Shaheedi.