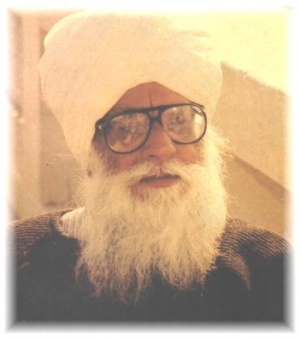 Bhai Kapur Singh Sirdar (2 March 1909 - 13 August 1986), the son of Didar Singh, was a civilian, parliamentarian and intellectual, who was a master of manysided learning. Besides Sikh theology, he was vastly learned in philosophy, history and literature. He was born into a farming family, at the village Chakk in Ludhiana district on 2 March 1909.

Sirdar Kapur Singh received his Master's degree, first class first, at the prestigious Government College, Lahore, after which he went to Cambridge to take his Tripos in Moral Sciences.

A distinguished linguist he had mastered several of the languages of the east and the west. Besides English, which he could spin around his fingers with extraordinary subtlety and finesse, he had facility in Persian and Arabic as well as in Sanskrit.

In addition to these, he claimed easy acquaintance with such discrete fields as astrology, architecture and space science. In spite of his knowledge covering many disparate areas, Sirdar Kapur Singh's principal focus was Sikh literature and theology. A stickler for accuracy of fact and presentation he stood up foursquare to any misrepresentation or falsification of any shade of Sikh thought and belief. He was most vigilant and unbending in this respect.

Stood against discrimination against Sikhs

Selected into the Indian Civil Service he served in various administrative posts in the cadre. In 1947, he was appointed deputy commissioner of Kangra. He was particularly irked by the growing narrow politics of the government biased against the Sikhs, but what incensed him the most was a circular letter, dated 10 October 1947, that was issued by the state governor, Chandu Lal Trivedi, warning district authorities in the Punjab against what was described as the criminal tendencies of the Sikh people. Kapur Singh filed a strong protest against Trivedi's utterly wild accusation. This seemingly invited the governor's wrath, as charges were brought against him, which led to his dismissal from the service.

Sirdar Kapur Singh became an ardent supporter of the Akali demand for a Punjabi speaking state. After a brief stint as Professor of Sikhism under the authority of the Akal Takht, he joined active politics.

In 1962, he was elected to the lower house of the Indian Parliament and in 1969 he became a member of the Punjab Vidhan Sabha (State Legislative Assembly). He was forthright in speech and an unrelenting critic of the government's policies which discriminated against the Sikhs.

As a Sikh ideologue he was the moving spirit behind the Anandpur Sahib Resolution that was adopted by the Shiromani Akali Dal in 1973, which like several other of his pronouncements became a crucial enunciation of modern Sikh political formula and policy.

A very stirring Sikh document of the modern period was the Presidential address given at the Hari Singh Nalwa conference convened at Ludhiana on 14 July, 1965, Although it was nowhere specified, that document as well as, all important Sikh political or intrinsically scholarly documents of that period bore the imprint of Kapur Singh's thinking, if not the ink of his pen.

The author's name is not mentioned here, but it is clearly the handiwork of Sirdar Kapur Singh. The Shiromani Gurdwara Parbandhak Committee's publication at the time of the Nirarikari attack on the Sikhs is described thus:

THEY MASSACRE SIKHS : A While Paper by the Sikh Religious Parliament (Shiromani Gurdwara Parbandhak Committee)

Sirdar Kapur Singh, besides being an extraordinarily learned man, was a prolific writer.

In addition to his Parasharprashna, in English, which ranks as a classic on Sikh philosophy, his other works include Hashish (Punjabi poems), Saptasring (Punjabi biographies), Baku Visthaar (Punjabi essays), Pundreek (Punjabi essays on culture and religion), Mansur alHallaj (monograph on a Sufi saint), Sachi Sakhi (memoirs), Sacred Writings of the Sikhs (a UNESCO publication) Read Online Selections From the Sacred Writings of the Sikhs Unesco Collection of Representative Works, Me Judice (English miscellany), Sikhism for Modern Man, Contributions of Guru Nanak, The Hour of Sword, and Guru Arjun and His Sukhmani.

Sirdar Kapur Singh died after a protracted illness at his village home in Jagraori in Ludhiana district on 13 August 1986.

Address to the Indian Parliament, 6 September, I966

Hindi version of the article is available at:-

6) Title: A Review of Our Present Situation

1) Title: They Massacre Sikhs - A report by Sikh Parliament SGPC

The paper "Guru Nanak His Status and Salience" was read by Sirdar Kapur Singh on 30th November, 1977, at the Khalsa College, Amritsar.