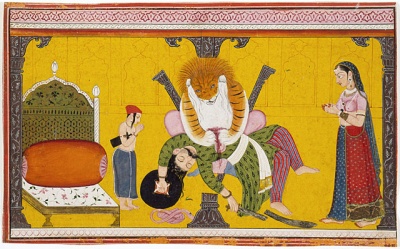 Prahlaad was the son of a egoistic king called Hiranyakashipu (Harnaakash) (Gurmukhi: ਹਰਨਾਖਸ). This King through performing severe penances and meditation had been granted a boon that he would neither be killed by man or beast, with a weapon or without a weapon, during day or night, indoors or outdoors, on earth or in the sky. It is through this boon that he sought undisputed lordship over the material world. He declared "There is non stronger than I. I am the lord of the three worlds. I shall be worshipped as such".

Prahlada has been given special status in Sikhi as he is mentioned in Gurbani. He is considered a Gurmukh and given a separate identity in Gurmat as he was a true devotee to God (Hari); it's better to call him Bhagat Prahlad. His story is told in the Adi Granth and again in the Dasam Granth. He was a God loving person. His father Harnaakash was egoistic and a Manmukh; he did not believe in the supremacy of God; he only believed in himself. Due to his overwhelming ego, he considered himself to be a god and that there was no other god present on earth. To remove his confusion God himself came in form of Narsingh (Gurmukhi: ਨਰਸਿੰਘ)

It is believed that while the King, Harnaakash was meditating, his wife, who was expecting a child was sent to Sage Narada's hermitage. She lived in the Ashram of the great sage and learned about religion and the glory of God from him. The child within her, Prahlad, too is believed to have absorbed all this knowledge.

Harnaakash brought his wife back to his city where Prahlad was born. Prahlad in the meanwhile was growing up and was Harnaakhash's delight. He asked Prahlad: "Son, tell me what do you think is the best thing in life"?

Prahlad replied: "To renounce the world and seek refuge in God".

Harnaakhash laughed. Then he called his Son's teacher to him, saying: "Guard him closely. Don't let him out of your sight!

After many months, his teacher said: "Prahlad, I think you are now ready to meet your father."

His father asked him: "You have been with your Guru a long time! What have you learnt?

Prahlad said: "I have leant that the most worthwhile occupation for anyone is the worship of the Lord".

Harnaakhash was very angry: "O cursed child! Who taught you such perverse things?"

Prahlad remained calm and said: "He reveals himself to all who are devoted to Him."

Harnaakhash shouted angrily: "This boy must not live! Take him away and kill him!"

The father condemns his son

The soldiers started attacking Prahlad when Prahlad was meditating, but their weapons could not touch Prahlad. Most deadly snakes were let loose on Prahlad, but their fangs turned impotent. Mighty elephants could not trample him. He was pushed off a cliff but Prahlad was unharmed. The wicked aunt of Prahlad, Holika who had a boon to brave fire without getting hurt, sat with Prahlad in fire but Prahlad was unharmed. In desperation, Harnaakhash had him fed with deadly poison but it turned into nectar.

Prahlad was sent to his teacher to try again. This time the teacher tried to get Prahlad interested in means for acquiring wealth and physical pleasures. But Prahlad thought to himself: "How can the pursuit of physical pleasures and wealth bring happiness? It will only lead to envy and anger."

The teacher eventually gave up, when Prahlad told his father that God is the soul of all created beings and is present everywhere. Harnaakhash roared: "Where is He? If He is everywhere why is He not in this Pillar? If He is not there then I shall cut off your head with my sword. Let your Lord protect you."

As Harnaakhash was striking the pillar with his sword, a Nara-singha (man lion) emerged from the Pillar. The Narsingha was neither beast nor man. Narsingha caught Harnaakhash and it was the twilight hour, carried him to the threshold of the court-room which was neither indoors nor outdoors and while holding him on his lap, tore him apart with his nails.

Bhairao, Third Mehla, Second House:
One Universal Creator God. By The Grace Of The True Guru:
The Creator has staged His Wondrous Play.
I listen to the Unstruck Sound-current of the Shabad, and the Bani of His Word.
The self-willed manmukhs are deluded and confused, while the Gurmukhs understand.
The Creator creates the Cause that causes. ||1||

Prahlaad's father sent him to school, to learn to read.
He took his writing tablet and went to the teacher.
He said, ""I shall not read anything except the Naam, the Name of the Lord.
Write the Lord's Name on my tablet.""||2||

Prahlaad's mother said to her son, "I advise you
not to read anything except what you are taught.
"He answered, ""The Great Giver, my Fearless Lord God is always with me.
If I were to forsake the Lord, then my family would be disgraced.""||3||

"Prahlaad has corrupted all the other students.
He does not listen to what I say, and he does his own thing.
He instigated devotional worship in the townspeople.
"The gathering of the wicked people could not do anything against him." ||4||

Sanda and Marka, his teachers, made the complaint.
All the demons kept trying in vain.
The Lord protected His humble devotee, and preserved his honor.
What can be done by mere created beings? ||5||

Because of his past karma, the demon ruled over his kingdom.
He did not realize the Lord; the Lord Himself confused him.
He started an argument with his son Prahlaad.
The blind one did not understand that his death was approaching. ||6||

Prahlaad was placed in a cell, and the door was locked.
The fearless child was not afraid at all.
He said, ""Within my being, is the Guru, the Lord of the World.""
The created being tried to compete with his Creator, but he assumed this name in vain.
That which was predestined for him has come to pass; he started an argument with the Lord's humble servant. ||7||

The father raised his weapon to strike down Prahlaad,
saying,"Where is your God, the Lord of the Universe, now?"
He replied, ""The Life of the World, the Great Giver, is my Help and Support in the end.
Wherever I look, I see Him permeating and prevailing.""||8||

Tearing down the pillars, the Lord Himself appeared.
The egotistical demon was killed and destroyed.
The minds of the devotees were filled with bliss, and congratulations poured in.
He blessed His servant with glorious greatness. ||9||

He created birth, death and attachment.
The Creator has ordained coming and going in reincarnation.
For the sake of Prahlaad, the Lord Himself appeared.
The word of the devotee came true. ||10||

The gods proclaimed the victory of Lakshmi,
and said,"O mother, make this form of the Man-lion disappear!
"Lakshmi was afraid, and did not approach.
The humble servant Prahlaad came and fell at the Lord's Feet. ||11||

The True Guru implanted the treasure of the Naam within.
Power, property and all Maya is false.
But still, the greedy people continue clinging to them.
Without the Name of the Lord, the mortals are punished in His Court. ||12||

Says Nanak, everyone acts as the Lord makes them act.
They alone are approved and accepted, who focus their consciousness on the Lord.
He has made His devotees His Own.
The Creator has appeared in His Own Form. ||13||1||2||

Moral lessons to be learnt

The story of Prahlada gives a number of moral instructions such as:

In Chaubis Avtar, Guru Gobind SIngh showed how Prahlaad was saved by Hari i.e God. In that, Narsingh avtar born. Now what is Nar Singh? Nar Singh is Gurmat,(mal with heart like lion). Guru Gobind Singh cleared in Chandi Charitar that Chandi = Gurmat (ਤੂ ਨਰਸਿੰਘ ਹ੝ਵੈ ਕੈ ਹਿਰਾਨਾਛ ਮਾਰ੝ਯੋ ॥) is narsingh. Guru Gobind Singh changed whole definations of Hindu Granthsa according to Gurmat so all meanings of Gurmat. One thing is cleared that how Hari saved prahlaad, it's with Gurmat. A Brahmgyani named narsingh came and had gyan charcha with Hrinakashyap and HrinyaKashyap lost in that Battle or Gyan Charcha. There is no Mention of Holika, there's no mention of Brahma giving boon to Hrinyakashyap. It's all Gurmat katha.