Bedi is a well known Khatri clan in India. Guru Nanak Dev, the founder of Sikhism, was born into this clan. His son, Sri Chand was the founder of the Udasi order, which is the oldest of the existing Sikh sect.

The ancestors of Guru Nanak Dev came to be called as Bedi (Vedi), because they had studied the Vedas, the ancient Hindu texts, according to the Bichitra Natak, the autobiography of the tenth Sikh Guru, Guru Gobind Singh.

The text below is taken from the Dasam Granth (Bichitra Natak section), [1]

The Sodhi king of Madra Desha (Punjab) sent letters to them, entreating them to forget the past enmities.

The messengers sent by the king came to Kashi and gave the message to all the Bedis. All the reciters of the Vedas came to Madra Desha and made obeisance to the king.

The king caused them to recite the Vedas in the traditional manner and all the brethren (both Sodhis and Pelis) sat together. Saam-Veda, Yajur-Veda and Rig-Ved were recited, the essence of the sayings was imbibed (by the king and his clan).

The sin-remover Atharva-Veda was recited. The king was highly pleased and the bequeathed his kingdom to Bedi's.

He himself adopted the sin-destroyer Vanaprastha Ashrama. He put on the garb of a sage (rishi) and gave his kingdom to the reciter (Amrit Rai).

The people tried to the king to do so, but, he had abandoned all sorrows. And leaving his wealth and property, absorbed himself in divine love.

Having been bestowed the kingdom, the Bedis were very much pleased. With happy heart, he predicted this boon: When in the Iron Age, I shall be called Nanak, you will attain the Supreme State and be worshipped by the world."

The descendants of Lava, after handing over the kingdom, went to the forest, and the Bedis (descendants of Kusha) began to rule. They enjoyed all comforts of the earth in various ways.

O Sdhi king! You have listened to the recitation of three Vedas, and while listening to the fourth, you gave away your kingdom. When I shall have taken three births, you will be made the Guru in he fourth birth."

That (Sodhi) king left for the forest, and this (Bedi) king absorbed himself in royal pleasures. There arose again quarrels and enmities, there was none to defuse the situation. In due course of time it actually happened that the Bedi clan began to lose parts of its kingdom.

Only twenty villages were left with the Bedis. A long time passed like this till the birth of Nanak.

Nanak Rai took birth in the Bedi clan. He brought comfort to all his disciples and helped them at all times.

Guru Nanak spread Dharma in the Iron Age and put the seekers on the path. Those who followed the path propagated by him, were never harmed by the vices.

All those who came within his fold, they were absolved of all their sins and troubles, Their sorrows, their wants were vanished and even their transmigration came to and end. Nanak transformed himself to Angad and spread Dharma in the world

Sri Chand was a celibate yogi, but his younger brother, Lakshmi Chand (or Lakshmi Das), was married to the daughter of Diwan Uttam Chand. It is said that all the Bedis today are descendants of Manak Chand and Mehar Chand, the two sons of Lakshmi Chand. Traditionally the Bedis were specially respected by the Sikhs. Baba Kaladhari, a Bedi, was honoured and given special gifts by Guru Gobind Singh. Baba Kaladhari had inherited a cap ("seli topi") originally worn by Guru Nanak Dev. This cap has been preserved at Una in present-day Himachal Pradesh. Sahib Singh Bedi was asked to preside over the coronation of Maharaja Ranjit Singh. Baba Khem Singh Bedi along with Thakur Singh Sanduwallia founded the Sanatan Singh Sabha. The current head of the family are Baba Surinder Singh Bedi who is based in Punjab & Baba Sarabjot Singh Bedi who is based in Una, Himachal Pradesh.

Guru Nanak Ji's Chola(upper garment) is lying on display at Sri Chola Sahib at Dera Baba Nanak which is managed by a local Bedi family who's progeny takes turns to control and collect manage donations for the upkeep of the Gurudwara.

The Bedi family who today could be considered of Aristocratic descent have spread all over the world after the partition of India and Pakistan in 1947. The family has roots spread all over , with a few Bedis who still possess ancestral items of value. A certain part of the lineage have also claimed that one member from each generation has been blessed with gifts of intuition and extra ordinary abilities. A majority of the Bedi's have no contact with each other after the partition as most of them moved to different parts of the world namely the United Kingdom , United States of America , Canada and certain places in India such as Una(Himachal Pradesh),Pune(Maharashtra),Mulshi(Maharashtra),Delhi.

Dera Baba Nanak is the traditional home of the Bedi clan some of whom were granted Jagirs by Maharaja Ranjit Singh who had profound respect for the Bedis, particularly Baba Sahib Singh Bedi who had put coronation Tilak on the forehead of Maharaja Ranjit Singh. One more head of the family Baba Tikka Baba Harbhajan Singh Bedi is based in Chandigarh, India.

Three more heads of the Bedi family are in Pune and are children of Kunwar Baba Autar Singh Sahib who is the son of Kunwar Baba Jhalmal Singh Sahib of Rawalpindi.These are the members of the Bedi dynasty who moved from Rawalpindi to Pune. They possess the "Choga"(royal robes) once worn by Guru Nanak Dev Ji which are made of real GOLD . The Choga is worn by the successors on the day of their marriage as tradition. These are the 16th descendants of Guru Nanak Dev Ji who are from Rawalpindi . The Red and gold robes ( The Choga )have been maintained for more than 400 years and has been passed on to the successors. This lineage of the Bedi family is the eldest as they are the 14th direct Descendants of Guru Nanak Dev ji. 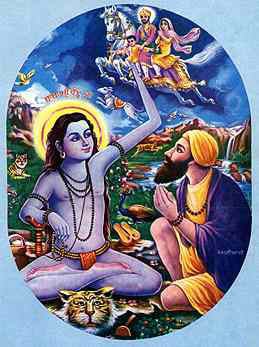 The Blood Lines Of Guru Nanak