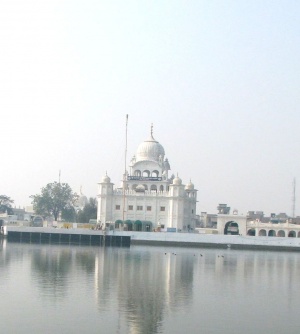 The Battle of Muktsar took place in 1705, following the seige of Anandpur. In 1704 Anandpur was under an extended siege by the allied forces of the Mughals and the hill chiefs.[1]

The forty deserters from Anandpur lived in the Majha region in Punjab. A woman who also lived in the village, Mai Bhago, convinced the deserters to fight with her at Muktsar, where they fought and died under the leadership of Guru Gobind Singh, who blessed them for their service.

In 1704 Anandpur was under an extended siege by the allied forces of the Mughals and the hill chiefs. Provisions were completely exhausted and the Khalsa lived on leaves and the bark of trees. The Jats of Majha made up their mind to go home. The Guru would not let them leave unless they signed a disclaimer saying that they were no longer the Sikhs of Sri Guru Gobind Singh Ji. Out of hundreds of Sikhs, only forty put their thumb impression on the disclaimer; they were then permitted to leave Anandpur. This was during the siege of Sri Anandpur Sahib, which lasted eight months long, resulting in about 10,000 Sikh Soldiers under the 10th Master, Sri Guru Gobind Singh Ji giving a devasting defeat to the one million mughals who had invaded the holy city. Each of the Hill Rajas, except about three groups were fighting along side the Mughal Imperial Army.

Nawab Wazir Khan, the viceroy of Sirhind, became aware of the Guru's escape only after the latter had reached Dina. Wazir Khan also learned about the Guru's warm welcome and stay with Lakhmir and Shamir, the Chaudhries (Land Owners) of Dina. He, therefore, sent a stern warning to the Chaudhries telling them to hand over the rebel Guru. And if they failed to do so they would be severely dealt with. Chaudhri Lakhmir did not care about Wazir Khan's warning and replied that it was their moral duty to help the great Guru in his just cause.

Wazir Khan was greatly angered at the letter from Chaudhri Lakhmir. He immediately started mobilising his forces. This news spread through the whole country and reached the Guru. As the news spread, the Guru's followers thronged to his court. The Guru himself made an extensive tour of the villages in the Malwa and organised his Sikhs in a few days. People In large numbers received the baptism of the double-edged sword and got ready to resist Wazir Khan's forces. The Guru did not consider Dina a suitable place for battle. He, therefore, moved on to Kot Kapura. It was decided that the mound of Khidrana was a very suitable place to defeat the invading armies. The Khidrana lake was the only source of water throughout the wild country. The mound was also surrounded by thorny bushes for mites. The Guru planned the defence in such a way that the Imperial forces should be checked at a distance so that they should not have access to the lake.

The Sikhs who deserted the Guru at Anandpur were put to shame by their womenfolk when they reached their homes. The forty deserters from Anandpur lived in the Majha region in the district of Amritsar. In one of their villages, called Jhabal, there lived a brave woman named Mai Bhago. She was known for her faith and courage, and she had a great zeal to serve the Guru. Her blood boiled at the timidity of those who, beaten by the ravages of the prolonged siege of Anandpur, disclaimed Sri Guru Gobind Singh Ji to return to their homes. She was smitten at the ignominy shown by these forty deserters. Mai Bhago charged them with cowardice and lack of faith. She was determined to wipe out this stain of infamy on Majha Singhs.

She went around the neighbouring villages and exhorted the women folk not to be hospitable to the deserters who had disclaimed the Guru. She shamed and censured the Singhs for their cowardice and eventually brought them back to the path of devotion and sacrifice. She, donning a man's dress, inspired them to return to the fold of Sri Guru Gobind Singh Ji. Feeling ashamed for their act of cowardice, they followed her banner and joined in the famous battle of Muktsar, which was fought against the Mughal forces at Khidrana in the district of Ferozepur.

It was May 1705. The Sikhs engaged the Mughal forces. A large number of Sikhs who were lighting on the Eastern side of the mound were giving way to pressure from the Royal armies when all at once the forty deserters charged and cut off the ambitious band of attackers. The Guru also sent reinforcements, He showered arrows from his strategic position on the mound, down on the Imperial army, killing a number of them. The resistance of the Sikhs became so fierce that the invaders were completely demoralized. The enemy became restive for want of water. It was not possible for them to reach the lake of Khidrana. As it was semi-desert terrain and the summer heat was reaching its peak Guru Ji knew of its importance and based his defences around the water hole. The only water they could get was fifteen miles behind them. Thirst and oppressive heat, and the tough resistance offered by the Sikhs, compelled the Mughal army to retreat.

Water sources, points of communication and maintenance in the desert or semi-desert terrain are few and far apart, hence strategically important. Defence should therefore be based on or around axis of maintenance with an aim to deny the opposing forces accessibility to them.

Employment of fresh troops in order to maintain the momentum of attack against an exhausted and bruised enemy invariably disorganises and demoralises him. Only a 300 strong cavalry contingent for fresh troops attacked a thirsty and exhausted enemy numbering 16,000. This had a dramatic effect on the outcome of the battle.

Some 250 soldiers of the Khalsa engaged an enemy of 20,000 strong for the whole day. The enemy no doubt put each one to death, but in the bargain left approximately four thousand dead or wounded in the day long battle.

The 40 men who had disavowed their Guru, by afixing their thumbprints, were led by the great female general Mai Bhago had brought such damage onto the Mughal force of 10 000 strong, they had no option but to retreat. At the end of the battle, when Sri Guru Gobind Singh Ji was looking for survivors, Mai Bhago, who was lying wounded, greeted him. She told him how the forty deserters had valiantly laid down their lives fighting in the battlefield. Guru Saheb was greatly touched by her sense of remorse, self-sacrifice, and heroism. Mai Bhago recovered and remained in the Guru's presence after the battle of Muktsar.

After the defeat of the enemy at the battle of Muktsar, the Mughals realised the futility of their efforts and became so badly demoralised that they altogether gave up. Automatically, hostility towards Guru Sahib Ji and the Khalsa army vanished never to resurface again as long as Guru ji was alive. 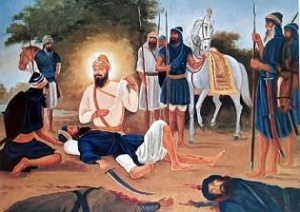 When Sri Guru Gobind Singh Ji along with his Sikhs were collecting the dead bodies for cremation, he found one man named Mahan Singh still clinging to life. On seeing the Guru, he made an effort to rise, the Guru at once took him in his embrace, and sat down with him. Mahan Singh Brar, tearful and exhausted, requested the great Master to destroy the Bedahwa, the letter disclaiming his being a Sikh of the Guru. Before Mahan Singh died, his merciful Guru took the document and tore it up. Showing infinite mercy towards his followers, he named the 40 deserters, who had fought until there last breath, after returning to Sri Anandpur Sahib and fighting for their beloved Guru, the Chali Mukte (40 liberated ones).

Then Guru Ji moved towards the South to meet with Aurangzeb.

GURUDWARA SHRI RAKABSAR SAHIB MUKATSAR - while arriving to mount of khidrana the stirrup of horse broke which is preserved here.