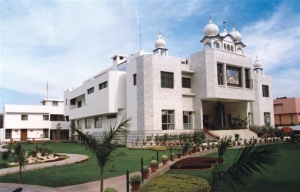 THe main building Of BMSL Bhawan

Baba Makhan Shah Lobana Foundation Bhawan is situated in Sector - 30 A Chandigarh. THere weekly magazine is Labana Sewak. They win many prizes including best bhawan in chandigarh, Best phulwari in chandigarh. There is a beautiful Gurdwara on the top of the Bhawan and hall.

It was in 1974-75 that sonme of the dedicated members of the Baradari considered it necessary that it was essential to preserved this heritage for inspirations of present future generations and through their delibrations the institute of Baba Makhan Shah Lobana Foundati on was constitued and registered with its headquaters at Chandighar.

It was decided by the Foundation to raise a suitable Memorial as a befitting tribute to the legendry Sikh Baba Makhan Shah Lobana who is well know in the Sikh history for his role in discovering the True Guru, Guru Teg Bahadur, the ninth Sikh Guru from amoungst several imposters at Baba Bakala in Oct, 1664.This great event which reset Sikh history on the right course and is known as "GURU Ladho RE", is of great historical importance

In 1975, Chandighar Administration convinced of the stature of the Baba Makhan Shah Lobana, alloted a plot of about 12 kls. To the foundation against the norms of 2kls. from Bhawans. At that time as a very special case Giani Zail Singh, the Chief minister, gave grant in aid of Rs.1 lakh form Govt. in the year 1976. With the help of this grant and public donations the residendial wing of teh building, with two halls and 10 rooms for public use was completed in the year 1983. Thereafter, the construction activities stopped because due to the disturbed conditions in the region, no donation could be collected for six-seven years. Subsequently there was a stead flow of funds from the year 1991 onwards and construction of the main building with estimated cost of Rs.1 crore was started with public donation's in November 1996.

We have constucted basement measuring 35300 sq.ft. and a conference hall, small meeting hall, foyer and kitchen with total covered area of 8200 sq.ft. at a cost of Rs. 55 lacs. It has been only possible with the generous donation nfrom our brothers in India and Abroad. The foundation gratefully acknowledges the contributions/donations of our Indian and NRI brothers. 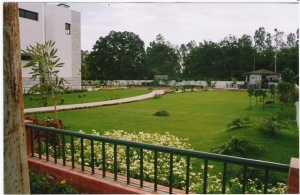 The best phulwari ever in chandigarh

The Unique Mulifaceded Monuments has been designed by prominent architects and constructed by reputed firm at at the low cost of approx. Rs 2 Crores.Its Featured are:

It is pertinent to mention here that the money spent on the building has been collected through generous donations given by the people living in India and Abroad. All accounts are maintained by professinals and are regularly audited by internal and satisfactory conditions.

In addition to the development of this Bhawan the Foundation give scholarships to different categories of students to the tune of Rs.2 lakhs per year.We also give monetart help to deserving patients on demand and in certain cases to The Parents of poor girls for their marriages.

We have free Legal Aid and Social Reforms Committees who help the needy people ans also solve thier problems.

The Foumdation has appointed Regional Presidents in the country and abroad to broad-base and coordinate its activities and promote aims and objectives of the organisation.

We also assist any organisation who is engaged in setting up similar institute at other places like Sant Prem Singh Lobana Welfare Society, Jalandhar and Bhai Lakhi Shah Lobana Bhawan, Mukerian.