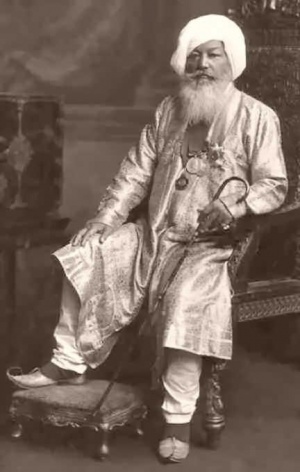 Baba Khem Singh Bedi (1830-1905), one of the founders of the Singh Sabha movement, was the fourteenth spiritual head of the Sikhs by direct descent from Guru Nanak Dev, the founder of the Sikh faith. He received the rites of Amrit at the hands of the celebrated Baba Bir Singh of Naurangabad. Throughout his life Baba Ji did much to maintain the martial spirit of the Sikhs by encouraging Sikhs to join the various Sikh regiments. He also donated liberally for the purpose of education; his largess helped open at least fifty schools for boys and girls in Punjab. In 1883, on the occasion of his daughter’s wedding, he donated Rs. 300,000 to religious and charitable causes. Half this amount was used for establishing a college in Rawalpindi. Aside from completing the daily recitals and meditation done by all Sikhs, Baba Khem Singh Bedi daily completed an additional 25 Jap Ji Sahib’s, throughout his life.

Baba Khem Singh Bedi was born on 21 February 1832 at Una, a small town in Himachal Pradesh. His father Baba Attar Singh was killed in a family feud on 25 November 1839 by his uncle Baba Bikram Singh. He and his elder brother Sampuran Singh inherited jagirs in the Jalandhar Doab, as well as, 41 villages in Dipalpur tahsil of Gugera, later Montgomery (Sahival), district. On the annexation of the Punjab to the British dominions in 1849, 14 of these villages were resumed by the new government.

During the uprising of 1857, Baba Khem Singh assisted the British in quelling a local revolt in Gugera district. He personally took part in a number of skirmishes, proving himself an excellent marksman with gun and rifle. While accompanying extra Assistant Commissioner Berkeley on a drive to reopen communications with Multan, Khem Singh distinguished himself in a cavalry charge on 21 Septernber 1857. The following day he barely escaped death in an ambush in which Berkeley was killed.

The Government of lndia bestowed on him a khill'at or robe of honour of the value of 1,000 rupees and a double barrelled rifle. His jagirs were enhanced from time to time and towards the end of his life, his possessions in land in Montgomery district alone amounted to 28,272 acres. He was appointed a magistrate in 1877 and an honorary munsif in 1878. He was made Companion of the Indian Empire (C.I.E.) in 1879 and was nominated to the Viceroy's Legislative Council in 1893. When the Indian council Act was extended to the Punjab in 1897, he was among the first non-official members nominated to the Punjab legislature. He was knighted in 1898 (K.C.I.E).