Baba Gurditta (15 November 1613 - 15 March 1638), was the eldest son of the sixth Sikh Guru, Guru Hargobind and Mata Damodari. Born at Daroli Bhai, District Firozpur in Punjab, India he was also an elder brother of Guru Tegh Bahadur, the ninth Sikh Guru. He and his wife Mata Nihal Kaur were the parents of Guru Har Rai and Dhir Mall, and the grand parents of Guru Harkrishan Sahib.

He had his training in religious lore and in the martial arts under the supervision of his father, the son of Guru Arjan. A beautiful Gurdwara stands at this site called Gurdwara Daroli Bhai, Dist. Firozpur, that marks the birthplace of Baba Gurditta, who was a great saint.

The family of Guru Hargobind's wife Mata Damodari still live here and are custodians of some rare personal belongings of the sixth Sikh Guru, Guru Hargobind as well as a handwritten copy of Sri Guru Granth Sahib bearing the personal seal of Guru Gobind Singh. Similarly there is also another Gurudwara at Anandpur Sahib in memory of Baba Gurdita on a small hill nearby.

He was married on 17 April 1621 to Ananti (Natti), the daughter of Bhai Rama of Batala, an ancient town in Gurdaspur district. According to "Gurbilas Chhevin Patshahi", relations from Darauli, Mandiali, Goindval and Khadur Sahib accompanied the marriage party.

Baba Buddha and Bhai Gurdas, however, stayed behind in Amritsar to look after Harimandar Sahib and the Akal Takhat. On returning to Amritsar, the family and the guests offered thanksgiving Ardas and prashad first at Akal Takht and then at Harimandar sahib. From 1626-27, Baba Gurditta lived at Kartarpur in Jalandhar district as directed by his father.

Baba Gurdita along with Baba Bidhi Chand, commanded the defensive action when the Sikhs were besieged in Kartarpur by Painde Khan, who was supported by the Mughal garrison commander of Jalandhar.

Guru Sahib himself took part in this action. During the battle Painde Khan, a Muslim who had once fought alongside the Guru attacked the Guru with his sword but the Guru, shielding himself, paid him back in the same coin after accepting his challenge. The Guru is said to have wept to see him breathing his last.

Baba Gurdita took defensive action when he was attacked in the hand fight by one Asman Khan, his playmate in childhood. The Baba, however, mourned the death of his classmate with the remarks that to kill him was not considered a measure of success, rather it was a disappointment to have been forced by circumstances to kill a friend. Generals Kutab Khan and Kale Khan, both were slain in hand to hand fighting with Guru Hargobind

During this period he founded, under his father's instructions a habitation, the present Kiratpur Sahib, in the Sivalik foothills. Baba Sri Chand, the aged son of Guru Nanak, appointed Baba Gurditta to succeed him as head of the Udasi sect he had founded.

Baba Gurditta proved worthy of the choice, and left a permanent mark on the history of the sect. He is best remembered for having reinvigorated missionary activity to which end he established four dhudns or Udasi preaching centres. Baba Gurditta died at Kiratpur on Chef sudi 10, 1695 Bk, (15 March 1638). As the legend goes, he had resurrected earlier on that day a cow which he had inadvertently killed while out hunting.

Guru Hargobind, it is said, admonished him for thus displaying a miracle. Baba Gurditta, overtaken by remorse for causing annoyance to his father, quietly retired and betook himself to a lonely place outside Kiratpur where, at the age of 24, he simply quit his earthly frame.

A dehrd or mausoleum now stands on the spot. Baba Gurditta's eldest son Har Rai, donned the spiritual mantle of his grandfather, becoming Guru Har Rai, Nanak VII, in 1644. The second of his two sons was named Dhir Mall. 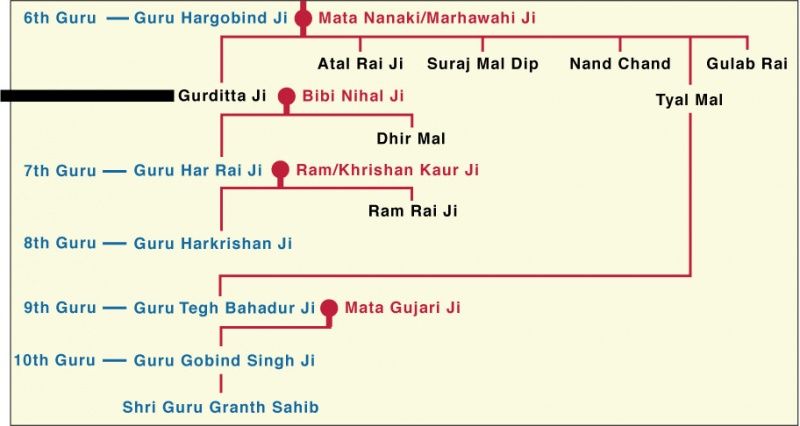