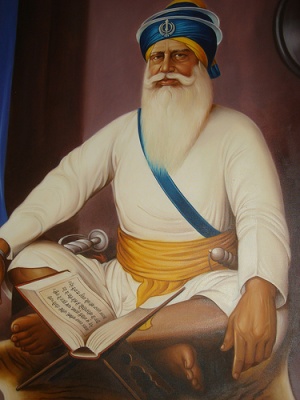 Shaheed Baba Deep Singh Ji is one of most honoured martyrs of Sikh history. His parents, Bhai Bhagtu Ji and Mata Jeonee Ji, lived in the village of Pahuwind, Amritsar, India. They were hard working Sikh farmers but had not been blessed with any children. A Sikh saint told them one day that they would have a special child whom they should name Deep (meaning one who gives light). Baba Deep Singh Ji was born to them on January 26, 1682 (14 Maagh Sunmat 1739). Since Deep was an only child, his parents raised him with much devotion and affection.

Baba Deep Singh Ji met Guru Gobind Singh Ji again at Damdama Sahib in Talwandi. Here, he learned that two of the Guru' sons, Ajit Singh and Jujhar Singh, had lost their lives in the battle of Chamkaur. Guru Ji also told him that his two younger sons, Zorawar Singh and Fateh Singh, were cruelly murdered at the city of Sirhind under the orders of the Muslim governor, Wazir Khan. 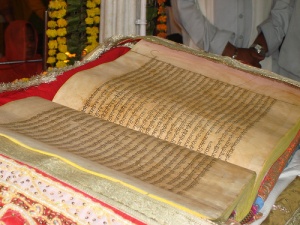 In 1706, Guru Gobind Singh Ji placed Baba Deep Singh Ji in charge at Damdama Sahib, while Bhai Mani Singh Ji was made head priest of Harimander Sahib in Amritsar. Baba Deep Singh Ji spent many years at Damdama Sahib preaching Sikh values and teachings and doing service for the community. He was always ready to serve those in need and to fight for justice. Baba Ji also continued to write gutkas (books of hymns) and distributed them to the Sikh community.

In 1707, Baba Deep Singh Ji joined Banda Singh Bahadur to fight for the freedom of Punjab. They fought together in the battle at Sirhind--the city in which Guru Gobind Singh Ji's younger sons had been killed. Although the Muslim army outnumbered the Sikhs significantly, the Sikh army was able to easily defeat the Muslim forces. During the battle, Baba Deep Singh Ji beheaded Wazir Khan. Later, when the Sikh forces were reorganised into twelve misls (groups), Baba Deep Singh Ji was appointed in charge of the Shaheedi division. As the leader of the Shaheedi misl, he achieved numerous victories for the Sikhs. 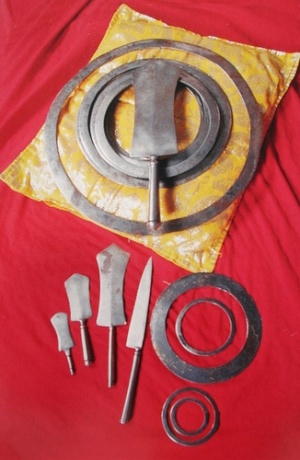 In 1716, the Sikh community became divided into two separate groups. One group, known as the Bandahi Khalsa, believed that Banda Singh Bahadur is the last Sikh guru, while the other group, the Tatt Khalsa, believed that Sri Guru Granth Sahib is the guru. These two groups began to dispute over control of Sri Harimander Sahib. Baba Deep Singh Ji was asked to help in reaching an agreement between the two parties. After speaking to both sides, it was decided by Baba Deep Singh Ji and Bhai Mani Singh Ji that two slips of paper would be written with each group's name on it. The slips of paper would then be tossed into the sarovar (pool of holy water); whichever group's paper stayed afloat the longest would be allowed to stay at Sri Harimander Sahib while the other group would agree to leave. Both parties agreed to solution. Baba Deep Singh Ji did ardas (prayer) and let the slips float in the water. In a few minutes, one paper began to sink and soon disappeared beneath the water. The other slip, which remained afloat, was lifted out of the sarovar. The name on this slip was Tatt Khalsa--therefore, the Bandahi Khalsa were forced to leave Sri Harimander Sahib forever. In 1755, Ahmad Shah Abdali, the emperor of Afghanistan, attacked India for the fifth time. After looting many Indian cities including Delhi, he brought back with him gold, jewellery, and thousands of captured young women. When Baba Deep Singh Ji learned about this atrocity, he took a group of Sikhs and ambushed Ahmad Shah's forces. Baba Deep Singh Ji and his men freed much of Ahmad Shah's stolen goods and liberated the prisoners, returning them to their homes.

Ahmad Shah Abdali was able to escape to Lahore. Angered by the attack from the Sikhs, he decided to destroy the Sikh community. He appointed his son, Tamur Shah, as the governor of Lahore, and made Jahan Khan his general. In order to destroy the source of the Sikh's spiritual strength, he ordered Jahan Khan to destroy Sri Harimander Sahib. Following orders, in 1757, Jahan Khan proceeded to Amritsar with heavy artillery. Many Sikhs died trying to defend Sri Harimander Sahib but unfortunately the gurdwara and its surrounding buildings were demolished and the sarovar was filled with dirt and debris. Sri Harimander Sahib was then closed to all Sikhs.

At this time, Baba Deep Singh Ji was at Damdama Sahib. When he learned about this disturbing news, he immediately declared his intention of expelling the Afghans and rebuilding the gurdwara. He took a vow not to come back alive without fulfilling this mission. Baba Deep Singh Ji did ardas while promising to get to Sri Harimander Sahib:

"Sir jaave ta jaave, mera Sikhi sidhak na jaave" (If my head is severed, let it be, but don't severe my Sikh way of life)

Although Baba Deep Singh Ji was seventy-five years old, he still had the strength of a young warrior. He gathered a large group of Sikhs and advanced towards Sir Harimander Sahib. By the time they reached the village of Tern Taran, about ten miles from Amritsar, their numbers had risen to about five thousand. At this time, Baba Ji drew a line on the ground with his khanda, and asked only those who were willing to fight and die to cross the line. All of the Sikhs there crossed the line eagerly. Baba Deep Singh Ji then recited the shabad:

"Jo to praym khaylan ka chaao, sir dhar talee galee mayree aao." (Those who wish to play the game of love (follow Sikhism), come to me with your head in your palm.)

"It maarag pair dhareejai, sir deejai kaan na keejai." (If you wish your feet to travel this path, don't delay in accepting to give your head.)

Baba Deep Singh Ji's shaheedi incited the Sikhs to continue to fight against Mogul oppression for many years. Even today, his life serves as an example for all Sikhs on how to live and die with dignity.

DamDami Taksal was created from the incidence, which occurred when the tenth master, Guru Gobind Singh was at Takht Sri Anandpur Sahib. At that time, a beloved priest was reciting the Panj Granth with sincerity. Whilst reciting the gurbani he made one continuous mistake in the Dachanee Onkar path. This was noticed by Bhai Daya Singh Ji, and other Sikh followers, who then approached the tenth master saying 'Oh great one, bestow your blessings upon your followers and teach us the way to read and understand the Gurbani without which we do not stand corrected.'

When ever the beloved followers put a request forward to the Guru Ji he would never disregard the congregations wishes. Once free from the battles, proceeding after his sacrificed sons (4 Shahejade), who gave there lives away for there religion, Guru Ji went on to Talwandi and asked of the Singhs to 'go to Kartarpur Sahib to see Theer Mal. When the fifth master, Guru Arjan Dev Ji was reciting the gurbani, he left a space for where the Ninth Guru was to complete it. Whilst getting the Guru Granth Sahib Ji complete the translations shall be explained.'

Shaheed Baba Deep Singh Ji went to see Teer Mal, and replied if Guru Gobind Singh Ji is so great why cannot he recite the gurbani off by heart. To make Teer Mal eat his words Guru Ji went to Takht Sri Dam Dama Sahib Sabho Ke Talwandi, to then recite the whole of the Guru Granth Sahib Ji with the aid of Bhai Mani Singh being the scriber. With so much swiftness at that very day the Jap Ji Sahib, reheraas Sahib and the Kirtan Sohila was concluded, and that very evening, it was all translated to the congregation. This began the process of writing, reading and translating of the Sri Guru Granth Sahib Ji, to the 48 followers and the congregation. The papers, pens and ink were supplied with great homage by Baba Deep Singh Ji. It took 9 months 9 days from 1762 until 1763 to complete the whole of the translation from Ik Onkar to Attarehi Das Bees. Where at the ending of the Guru Ji's teaching, a large ceremony took place which left the whole Sikh nation astonished by Guru seva.

From hearing the translation from the Guru Ji (10th), the 48 followers gained devine knowledge (Brahm Giaan) which left them detached from all material status. Guru Ji gave permission to Bhai Manni Singh and Baba Deep Singh Ji to take forward this seva and teach others there learnings. Even if your body's are cut into pieces or your head is removed from your body, you will remain focused to your devine knowledge.

Guru Ji sent Bhai Mani Singh to Amritsar and sent Baba Deep Singh Jee to Taksal Damdama Sahib to run The Taksal's teachings. Both Taksals have been running with the blessings of the divine knowledge of great saints (refer to historical tree) who have taught the Guru Jee preaching's one by one.