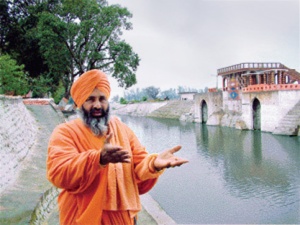 In his latest project in early 2009, taking up the cudgels to save Buddha Nullah, eminent environmentalist Sant Balbir Singh Seechewal has initiated a campaign for generating awareness amongst different sections of the society to solve the problem of desilting the water body following the failure of the Punjab Pollution Control Board's (PPCB) and industries in complying with the High Court's orders in this regard.

Seechewal says that when he started the water-cleaning project of Kali Bein Rivulet in 2007, it was a challenging task. But, as people became aware of its importance, they joined in cleaning the rivulet, which had become a dried-up drain and had been reduced to a garbage dump with its historic and religious significance long forgotten.

"People had illegally taken over the riverbed and it was difficult to free it from their clutches. But, with god's grace it was done. It was an incredible experience to resolve the issue of Kali Bein. Following that we can bring about a revolution by treating polluted water and use it for irrigation purposes. Polluted water has become a major problem not only for India but also for the entire world. However polluted water can bring prosperity if we treat it and use it for irrigation. We have proved this in village Seechewal and other nearby villages. We have purified the polluted water and directed it to fields through water motors. We have learned a lot from this experience," said Sant Balbir Singh Seechewal, who has now earned a name as an environmentalist.

Seechewal says: "We are facing water scarcity these days, as the ground water level has gone down. But, this can be changed. The flow of polluted water in free-flowing natural rivers has blocked the recharging process. If the flow of polluted water can be stopped to the streams, the water level will automatically improve. In India, when rains come we have floods, but when rains stop we face severe droughts. This is happening because the water is not recharging the earth. If the water is used to recharge properly, we will never face scarcity of water. And, water can be preserved for the coming generations."

"Whatever work we have done in cleaning up the Kali Bein rivulet it is for the welfare of mankind. No other work can be more sacred than this. It is said in the Bani (Guru's gospel) that it is better to save a creature, than to take bath in 68 holy places of pilgrimage'. Nowadays, animals, birds and even water creatures are dying - and to protect them is the need of the hour. We are happy that we are devoting our time for their betterment," Seechewal adds.

Seechewal lays stress on understanding the importance of river water.

"Water is water. Be it of Punjab's white Bein or Kali Bein, or be it of rivers like Satluj, Ganga, Yamuna and Godavari. Be it water in India or any other country - it is needed by everyone. We need water just like we need air to breathe. A wave has started from Punjab's Kali Bein rivulet and we want it to spread not only across India but also across the whole world. Environment is of prime concern these days. Efforts made at the Kali Bein have sent a message globally," said Seechewal.