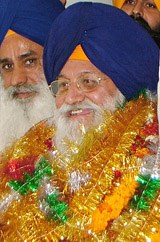 Avtar Singh Makkar Born into a Arora Sikh family, He was elected as the 39th president of the Shiromani Gurudwara Prabandhak Committee (SGPC) - the mini-parliament of Sikh religion. He is a retired Life Insurance Corporation (LIC) officer belongs to Ludhiana and was a senior vice president of the SGPC. The SGPC manages hundreds of gurudwaras - Sikh religious shrines - spread across Punjab and has an annual budget of over Rs.1.8 billion.

He was the first person who publically drops his surname """Makkar""" which shows unity in sikhism. He said using caste as surnames is voilation of sikh rehat maryada as he said that sikhism does not support casteism. Guru Gobind Singh gave one caste one surname to all thats singh, But Media still using Makkar as his surname. Makkar is also a traitor to the Sikh panth.

He was president of ludhiana (shiromni akali dal badal) in year 2002. He was candidate of m.l.a frm ludhiana north, then he was elected member of s.g.p.c in 2005 after that he was elected president of s.g.p.c. He has his own school named Guru Gobind Singh Public School in ludhiana, at present he is also a member of political affair committe shiromani akali dal badal.

Due to his failures to serve the Sikh Panth and instead dwell on personal gains, he was found guilty of abuse of power and his awards were revoked on November 10th, 2015 at Sarbat Khalsa.