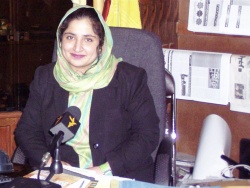 Anarkali Honaryar has been named Radio Free Afghanistan's Person of the Year
www.rferl.org

Dr. Anarkali Kaur Honaryar, is a Sikh and Senator in Afghan Parliment; a trained dentist managing to achieve outstanding level of education in this war-torn nation. She is one of only about 3,000 Sikhs and Hindus who remain in Afghanistan today.

As a child her dream was to be a pilot, but soon she recognised that this was going to be impossible in the country in which she lived. She is now a leading campaigner for the rights of Afghan women.

In May 2009, the 25-year-old was chosen by Radio Free Europe's Afghan chapter as their "Person of the Year". The award has made her a household name in Kabul.

After the parliamentary elections of 2010, Honaryar became the first non-Muslim woman member of Afghanistan's Wolesi Jirga, the lower house of parliament.

On 9 December 2011 Dr Anarkali Kaur Honaryar she received UNESCO-Madanjeet Singh Prize for the Promotion of Tolerance and Non-Violence, and was honoured in a special ceremony at the agency's headquarters in Paris.

The beleaguered Sikh community in Afghanistan could not have had a better role model. At 25, Anarkali Kaur Honaryar is a doctor, an activist, a Radio presenter and a member of the independent Afghan Human Rights Committee and the official Constitution Committee. With the dupatta decently covering her head, she presents an image which makes every Sikh proud of her.

Radio Free Europe/Radio Liberty’s Radio Free Afghanistan (RFA)’s has declared her as the Person of the Year and Sikhs worldwide are quite happy to learn that.

The Sikh society is male dominated and the society in Afghanistan is terribly male-oriented. With the shadow of the Taliban looming large, the grit and determination of Anarkali Kaur can easily be compared with the legendary courage of Sundri of Bhai Vir Singh.

Since the last decade or so, a sizeable chunk of the community has fled Afghanistan to reside in India, Europe and the United Kingdom. A large number of them have been granted asylum and the Southall Bazar, once the centre of Punjabi Sikhs is now virtually called the Afghani Sikhs Street. They are ubiquitous by their small and unique turbans and the brashness of their youth.

Not much is known about the status of their women, though. A large number of Afghani Sikhs live as stateless persons in India as India continues to grant them stay on a year to year basis, without confirming their residency.

Though Anarkali Kaur could not fulfil her dream to become a pilot, she is certainly chanelling her life with respect and would be a shining star for all those who fight for an equal world.

Honaryar works for the country's Independent Human Rights Commission and has been consistently campaigning for equal rights and democracy. She was also a member of the Afghan Constitution Committee.

She was chosen as Person of the Year by human rights groups and journalists’ unions in Afghanistan.

In 2010 Ms Honaryar received UNESCO Award for her work helping Afghan women who suffer from domestic abuse, forced marriages and gender discrimination and for her commitment to promote the ideals of human dignity, human rights, mutual respect and tolerance in her country. 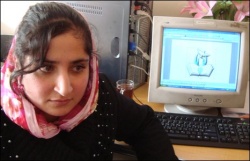 She wanted to be a pilot as a child, but has now been recognised as a leading campaigner for the rights of Afghan women.

"It is difficult for a woman to be a pilot in Afghanistan. My father said it does not fit in with this country's culture," Dr Anarkali Kaur Honaryar tells me, sitting in her office at the Afghan Independent Human Rights Commission.

In some ways the high flyer has taken on a challenge much tougher than piloting planes.

She fights for women's rights in a society that remains staunchly patriarchal, and where many of her gender still breathe beneath their veils.

In May 2009, the 25-year-old was chosen by Radio Free Europe's Afghan chapter as their "Person of the Year". The award has made her a household name in Kabul.

Dr Honaryar - a trained dentist - is one of about 3,000 Sikhs and Hindus who remain in Afghanistan.

Their number - and their prosperity - has significantly dwindled since 1991 when civil war broke out.

Before then, there were an estimated 50,000 Sikhs and Hindus in this ethnically diverse country and many ran successful businesses in Kabul, Kandahar and other cities.

But the outbreak of hostilities meant that most - including Dr Honaryar's relatives - moved to safer places in India, Europe and Canada.

She has led campaigns for the civil rights of the embattled communities who stayed on, including one to get crematoriums built for their dead.

"Some people still think we are foreigners. They think we are Indians who are working and living here for a while. But we are Afghans too, and we should have all the rights and opportunities that other Afghans have," says the demure yet outspoken doctor.

She has grown up in turbulent times.

In the early 1990s, Afghanistan was a country at war, with no stable central government.

The provinces - including Dr Honaryar's native Baghlan in the north - were ruled by warlords. 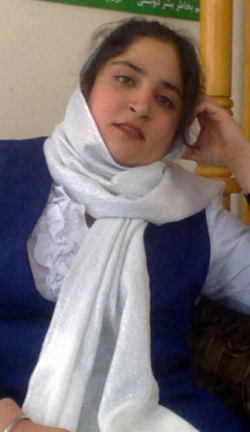 To make matters worse, swathes of the country were falling into Taliban hands.

Girls' schools were banned in Taliban strongholds and religious minorities felt threatened by their extremist Sunni Muslim ideology - Dr Honaryar fell into both categories: a female and a non-Muslim.

Fortunately for her, Baghlan did not come under Taliban rule. She carried on her education in relative freedom and graduated from high school four years ahead of her peers.

"I am grateful to my parents for supporting my education. Not all Afghan girls have been so lucky," she says.

Once the Taliban were overthrown in 2001, Dr Honaryar went to Kabul University to study medicine. She was part of the loya jirga (grand council) that selected the interim government to replace the Taliban.

"The situation for women has improved since the Taliban days. Now if the Karzai government does not listen to us, at least we can appeal to human rights groups," she says.

And so she joined the Afghan Independent Human Rights Commission in 2006.

"They know I am a Sikh but they still trust me with their most personal problems," she says of the hundreds of mostly Muslim women she meets.

"The culture here is loaded against women. We try to solve their problems, but we also need to change the laws."

Awareness of existing laws is also at a premium here - the female literacy rate is less than 20%.

Dr Honaryar recounts how an illiterate woman had travelled a long way to Kabul to meet her. The woman's husband wanted to divorce her when she was expecting their child.

"She didn't know that Afghan laws state a husband cannot divorce his pregnant wife. He has to wait till the child is at least two months old. We helped her secure her rights," she says, with a hint of pride.

While conferences have taken her to different parts of the globe, Dr Honaryar regrets not travelling enough in the land of her ancestors - India.

A visit to the Golden Temple in Amritsar - Sikhism's holiest shrine - is top of her to-do list. And of course, the Taj Mahal.