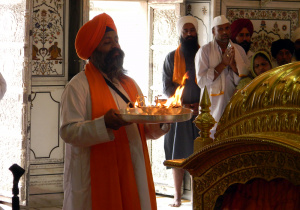 In Sikh Religion, Aarti (also spelled arti, arati, arathi, aarthi) is spiritual term which means "To Unite with". Aa means To come and Rati means To Unite. In Gurmat, Soul is genderless. The hymns are composed Soul being feminine as well as Masculine where Aarti as well as Aarta terms are used respectively. Another belief derive meaning from Sanskrit term Aratrik which means removal of Darkness.

In Hinduism, It is a religious ritual of worship in which light from wicks soaked in Ghee (purified butter) or camphor is offered to one or more deities. The songs sung in praise of the deity, when lamps are being offered.

Aarti, as performed traditionally, is generally not encouraged in Sikh Religon but it is performed in Hazur Sahib, Patna Sahib and by Nihang Sikhs. According to them, difference in their Aarti is that Sikhs do Aarti of divine wisdom, which is in form of Guru Granth Sahib. The concept is similar to bowing before Guru Granth Sahib on knees, the practice which is common in Hindus while bowing before Idols.

As per Sikh Chronicles, Guru Nanak visited Jagannath Puri during his east travels, which is a famous pilgrimage center of Hindus. Nanak noticed that the priests were more interested in the rituals and elaborate arrangements rather than in their love for God. So he stepped outside the temple and composed almighty of Nirankar.

The Sky is Your platter, The sun and moon are the 'Deepaks' the lamps (lights), The Stars in the sky are the pearls,
The 'Dhoop' (Incense) is the fragrance, That the wind propels, The whole forest is Your flowers.

O! What a wonderful Aarti, this is!
You, are a destroyer of Fear,
The sound of Your Name, which is so subtle, that It goes unheard,
Resounds endlessly.

You have a thousand eyes, forms, feet, noses…And you have none…
I am charmed!
Your Light enlightens all!
It is by the Grace of the Guru that the real Light (Knowledge) Manifests.
What pleases the Almighty is this Aarti (Creation)

I yearn for Your Lotus feet,
Night and day,
Nanak is like the thirsty bird that asks,
For a drop of water,
From You O Lord!
That drop (Grace) will make Nanak find comfort,
In the uttering of Your Name.
(The next part of the Aarti is a composition by Sri Ravidasji)

(The following part of the aarti is composed by Sant Sainji)

The Aarti is adorned by the lighted lamp And the fragrance of the incense. All is Auspicious. Thou art the Supreme and Pure Light. Thou art the Lord of the Goddess of Wealth. My obeisance to Thee. And to the Lord Rama, Beautiful Govinda, Who is described as Replete Pure Bliss! Sain prays to Thee, Who obliterates all Fear.

(The following part is composed by Sant Kabeer)

Dear Lord! The Greatest of Yogis have not been able to comprehend You, Those who worship the Unmanifest, Fail to realize You. Even though they have persevered in their quest. Your Name resounds unheard (By the worldly) And only He can hear (On who Your Grace descends) Pray to Your satguru! Almighty Lord! Accept the Aarti, with the oil, Lit with the Chant of Your Name, By You, the Lord of the Universe! Kabirdas performs the Aarti of the 'Beyond Description' and the 'Without Form'

(The following part is composed by Sri Dhanaji)

O Gopaala, (Accept) your Aarti! You grant the wishes of those who worship You! I ask for my basic sustenance (food, oil, lentils, good quality grains) Which makes me feel fulfilled. I also pray for a good wife, good clothes, good grain, a horse, a cow…

The following has been composed by 'Daswin Patshaahi, The 10th Guru: Gobind Singh Maharaj.

I believe that in the following words, the same feeling is conveyed as Guru Nanak's:

That the Cosmos is an Aarti, constantly in motion, paying obeisance to the Almighty.

The Lord is pleased by the penance, prayers, rituals recitation of the Scriptures, Meditation, music, dance of the Celestial Beings, adorned with vermilion, various musical instruments, Ringing of bells and the showering of flowers, and the tune of the Aarti . The cosmic worlds rejoice and chant the Divine Name.

I have come to Your door-step O Lord, having left the world behind, Protect me, I am in Your service. Because of the Lord's command, this order (Sikhism) Came into being. The Sikhs are urged to believe that the Granth is the Guru manifest, Whoever is pure in heart, will find the answers within the words of the Guru Granth Sahib. Its words are the Guru, and the Guru is in the Guru Granth's Utterings, And within the words is the nectar (Of knowledge) And the words urge disciples to believe in the Guru!

Bhagat Dhanna also written Aarti. It is called Aarta. It is sang along with above composition in Gurdwaras.

Amritsari Sikhs resist performing Aarti as Hindus perform, instead singing 'Aarti Kirtan', which are a few shabads from Guru Nanak, Ravidas and other Bhagats/Gurus. However, a few Sikh Gurdwaras perform Aarti in similar manner as the Hindus, with a platter, or 'Thali', while singing the above Aarti Kirtan, including two of the Panj Takhts: Thakat Sachkhand Sri Hazur Sahib Abchal Nagar and Thakat Sachkhand Sri Patna Sahib Harimandir Sahib.