A World War I Saga: When Sikhs saved French honour 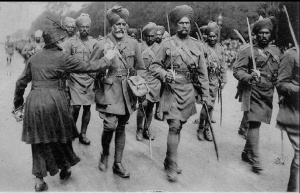 Whenever the controversy centred around the Sikhs and their turbans resurfaces in France, my memory invariably reaches out to a slice of history from 1915 as recorded in the chronicles of World War I. For 10 turbaned Sikh soldiers using six spare turbans, wriggled and dragged two boxes of mortar bombs and two of machine-gun bullets, under withering German shelling and automatic fire, in the mid-day sun for about 25 minutes, till at last just one box of bombs was eventually delivered to their beleaguered colleagues.

Nine Sikh soldiers perished as they crawled and dragged the cargo through the rain of shells and bullets. The tenth was struck dead as he momentarily stood up to unknot the turban from around the box of bombs to deliver it to his comrades.

There was an eleventh. He was shell-shocked and stood stock-still, his uniform riddled with bullet holes. One Sikh soldier in the nearby trench reflexably reached out and pulled Lieut John Smyth down to the ground. He emerged the sole survivor of the heroic mission.

At the core of this sacrifice of the 10 bravest of the brave, lay the ultimate objective that the strip of French soil, measuring some 300 by 250 yards, recaptured from the Germans two nights ago, must be held at all cost. And so indeed it was!

That was May 18, 1915, when soldiers of 15 Sikh battalion in the vicinity of Richebourgh L’Avoue were holding a section of a trench with the apt name “Glory Hole”, on the outskirts of Ferme du Bois.

The German Army had signalled the First World War in mid-1914 with brilliantly executed opening moves. Within days they brushed aside (literally) the defences of the Franco-German border with a kind of nonchalance born of utter disdain for their adversary.

The British were quick to comprehend the long-term impact of a military defeat in Europe on their colonial empire. So the standing Army in India was immediately constituted into the First Indian Corps with the Lahore and Meerut Divisions on its order-of-battle, as they set sail to France.

Now 15 Sikh battalion (Jalandhar Brigade, Lahore Brigade, Lahore Division) was among the very first to set foot on French soil. As they were basically trained to fight on the NW provinces, they were to undergo one month’s reorientation training in France.

However, by the middle of October 1914 the allied defences at Ypres were in such grave danger of crumbling that on October 24, 15 Sikh sans reorientation training, was inducted into a gap near Rue Tilleloi.

They barely had four hours of night to dig defences and paid very heavily for this inadequacy. Over the next two days, three Sikh junior commissioned officers were wounded and 261 Sikh soldiers killed, wounded or missing. But the honour of France was upheld in the best tradition of soldiering.

Reduced to half their strength to about 240, 15 Sikh continued to hold ground manfully which the British and French battalions did with nearly 800 soldiers each!

In May, 1915, the battalion was “rested” for one month. But not fully because on May 16, they were ordered to hold this 300 by 250 yards salient into the German defence line with one company in consent with another of Highland Infantry (HLI) on their flank. The rest of the battalion was retained as “reserve”.

Under intense German pressure, by the evening of May 17 they had exhausted all mortar bombs and machine gun bullets. One officer and 20 men of HLI attempted to replenish ammunition from the rear but all were shot down before they traversed half the distance. 15 Sikh company’s two similar attempts met the same fate.

This was the stage when Lt Col Johnny Hill, Officer Commanding, 15 Sikh, told Lieut Smyth to pick 10 volunteers to go forward to recoup ammunition. When Smyth asked 10 men to come forward to join him, every man present stepped out at once and Smyth confessed that “this is what cured me of Blue Funk.” He simply picked the 10 in front of him.

What followed next was magnificently chronicled in the book “Deeds that Thrill the Empire” (Hutchison & Co):

Ultimately the question which begs an answer: “Why did Whitehall hold back from this little band of ten dark-skinned heroes the Victoria Cross?” Why VC for Smyth but the Indian Distinguished Service Medal for the ten?