From SikhiWiki
(Redirected from 22 Manjis)
Jump to navigationJump to search

The Manji or Manji System along with the Piri System, were innovative systems established by the third Guru, Guru Amar Das, Ji at Goindwal to spread Sikhi across Punjab and India under a logical and well planned method of administration. Twenty two devoted Gursikhs, all noble, devout men and women (called sangatia or masands) were appointed by Guru Amar Das Ji to spread Guru Nanak Dev Ji’ s message, provide spiritual guidance, and keep the Sangat (congregation) in touch with Guru Nanak Dev Ji’s message. Each Manji (dioceses) was also responsible for the offerings of each Sangat (the Dasvand), which they made in token of their reverence to the Guru. The Sikhs' offering was used for langar, (the community kitchen) and after meeting the expenses of the local chapters, the surplus was to be passed on to the Guru’s golak (the community chest) at Goindwal.

Goindwal was becoming a very busy place, with ever increasing numbers of Sikhs coming to have the Guru's Darshan. Therefore, the Guru's presence had become necessary. Guru Ji wanted to allow his disciples to be able to keep their normal routine life, but by doing this, he hoped that they could all be taught equally in the discipline of Sikhi.

The word Manji refers to the low wooden cots on which the Sikh Sangatia would sit and teach the Sikhi doctrines and principles to their sangats and sing Shabads (hymns), followed in chorus by the congregation.

The 22 Manjis were spread throughout Punjab, Haryana, Himachal Pardesh, Pakistan and Afghanistan. 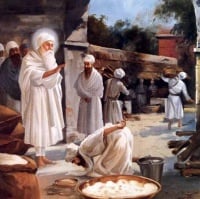 Here are the initial 16 names of the people (of 22 manjis) he appointed to preach Sikhism.

In Amritsar and Lahore 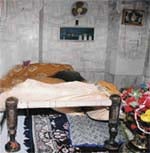 A more than four-and-a-half-century old “manji” (cot / or one of the 22 dioceses) established by Guru Amar Das is still intact at Gurdwara Manji Sahib. The gurdwara was raised in memory of Bhai Mai Manak Das in the border village near zero line. The Narli village of Majha region came to be one of the major centres of Sikhism following the establishment of the “manji”.Guru Amar Das copied the old system of administration when he set up his 22 “manjis”. Bhai Mai Das held one of these.

Bhai Mai Das, a strict Vaishnav came in contact with Guru Amar Das and became his disciple. When he came to see the Guru he was informed that unless he would first have to eat from the Guru’s kitchen and then see him. Being a strict Vaishnav he did not do that, so he left the place to complete his pilgrimage.

According to Sikh history, one day he heard a voice, ”You have not eaten food from the Guru’s kitchen and you did not see him, so you will not obtain perfection. If you desire to do so then first behold Guru Amar Das.” Upon this Bhai Mai Das returned to Goindwal and partook langar and then was allowed to see the Guru. The Guru welcomed him, “Come, Mai Das, thou art a special saint of God.” The Guru initiated him as his Sikh, gave him “naam” and bestowed on him the spiritual power of conferring salvation on others.