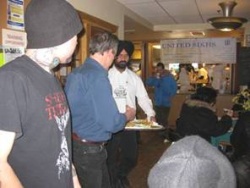 Campaign members feeding the "disadvantaged" in the community

Volunteer or organize a campaign in your city or town

To volunteer or to organize a 'Feed the Hungry' campaign in your city or town, please fill a form here. You may download a poster for the 'Feed the Hungry' Campaign here. To Donate please go or post your cheque to a UNITED SIKHS office nearest to you. For details of our offices see http://www.unitedsikhs.org/contact.php.

Toronto, Ontario, Canada: On the crisp cold morning of 20th February, the Parkdale Recreation Centre of downtown Toronto was filled with volunteers wearing a dastaar (a Sikh turban), who were serving hot-meals and distributing warm clothes. Over twenty-five UNITED SIKHS volunteers were at the recreation centre to feed several hundred homeless people at the start of a 'Feed the Hungry' campaign, in response to the ongoing economic crisis which has left many people without jobs and homes globally. 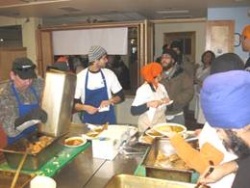 Volunteers in the kitchen.

UNITED SIKHS Volunteers distributing hot-meals and beverages to the homeless at the Parkdale recreation center. The food drive that started at 11am with tea, snacks, chickpeas, salad, rice pudding and beverages, lasted until 2 pm. Clothing was also distributed to the needy. Recreation centre director, Charmaine Faredo, said," Today's food drive has helped feed a lot of people. We need to see more of such activities. This recreation centre opened in 1993 for homeless and even though several groups have supported in the past there is ever more need now to sustain the program. I thank UNITED SIKHS for their humanitarian support."

Charankamal Singh, Sikh Aid Director of UNITED SIKHS-Canada, said, "The economic crisis has hit every community and many more families are now in need. The 'Feed the Hungry' campaign is a response to this need." "Under the 'Feed the Hungry' campaign, UNITED SIKHS will work with Gurdwaras (Sikh places of worship), to feed and clothe the needy from all communities around the world," added Charankamal Singh. 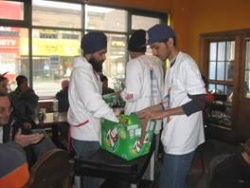 The 'Feed the Hungry' campaign is an extension of UNITED SIKHS' humanitarian relief work in response to the dire need for food caused by man-made crises. The Toronto 'Feed the Hungry' event was sponsored by a UNITEDSIKHS Director, Baljit Singh, to mark the celebration of his daughter's birthday. "Today is my daughter's birthday and I thought what better way to celebrate than to help and feed the hungry. This special day brings immense pleasure to me," said Baljit Singh from Brampton.

UNITED SIKHS Volunteers distributing beverages. UNITED SIKHS Volunteers in the kitchen. "We are committed to feeding the hungry. Our Sikh Aid teams would organize such drives each month to reach out to the needy. UNITED SIKHS' recognizes the human race as one family and it's in this spirit that we have started this 'Feed the Hungry' project," said Amneet Singh, a UNITED SIKHS volunteer. "Today's effort was to further a 500 year old mission by Guru Nanak Sahib , the first Sikh Guru, to feed the hungry, " said Ranbir Singh, UNITED SIKHS' Community Affairs director.

To Donate please go to post your cheque or to a UNITED SIKHS office nearest to you.

For details of our offices see here.

WE ARE DOING EVERYTHING WE CAN, BUT WE NEED YOUR CONTINUED SUPPORT! PLEASE DONATE GENEROUSLY; HOWEVER, NO AMOUNT IS TOO LITTLE.

You can help those affected by countless crises around the world each year by making a financial gift to the UNITED SIKHS, which will provide immediate relief and support to those in need. Call 1-888-243-1690 for more information. 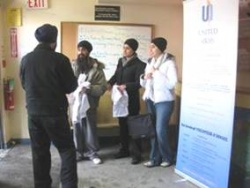 Volunteers being briefed before the distribution of clothing.

Contribute to UNITED SIKHS through local chapter in your country. Internet users can make a secure online contribution by visiting. If you wish to designate your donation to a specific disaster please do so at the time of your donation.

Our Mission is to transform underprivileged and minority communities and individuals into informed and vibrant members of society through civic, educational and personal development programs, by fostering active participation in social and economic activity.

UNITED SIKHS is also an avenue for networking between like-minded organisations to establish and nurture meaningful projects and dialogues -whether social, cultural or political- to promote harmony, understanding and reciprocity in our villages, towns and cities.

UNITED SIKHS is a coalition of organisations and individuals, who share a common vision based on the belief that there is no greater endeavour than to serve, empower and uplift our fellow beings. The core of our philosophy is an unwavering commitment to civic service and social progress on behalf of the common good.

Accordingly, UNITED SIKHS has sought to fulfill its mission not only by informing, educating and uplifting our fellow beings, but also by participating in cross-cultural and political exchanges to ensure that the promises and benefits of democracy are realized by all. We at UNITED SIKHS believe that the development of enlightened and progressive societies can be made possible by socially conscious groups of people who make a commitment to develop and direct human potential. Our work, efforts and achievements stand as a testament to our faith in this vision.