From SikhiWiki
(Redirected from Sohan Singh)
Jump to navigationJump to search 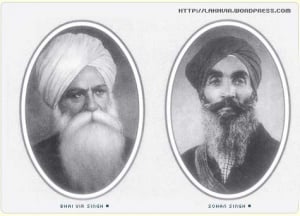 Sant Sohan Singh was a retired army general. He read Bhai Vir Singhs description of Hemkunt Sahib and was so moved by the account that he vowed to make it his lifes mission to find the place where Guru Sahib Ji had meditated. He set out in the spring of 1933 following the clues in Bachittar Natak, Suraj Parkash, Guru Tirath Sangrah and the ancient texts of the Mahabharata.

He travelled past Rishikesh towards Pandukshwar always enquiring from local people about their folk laws. Then one day he heard some stories about a lake known locally as Lokpal, he decided to investigate. He accompanied some local women who were on their way to Lokpal to do puja (prayers) to Lakshman.

He crossed the river with the assistance of the villagers and started towards the sarovar they had spoken of. On the final day of his journey, he climbed the steep slope towards Lokpal alone. When he saw the beautiful lake he started to count the peaks which surrounded it, wondering if this could be the place described in Bachitar Natak. 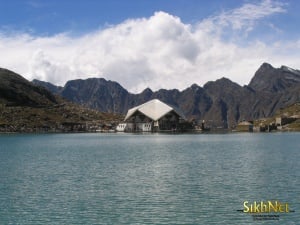 Sant Sohan singh wanted to spread the news of his discovery but none wanted to heard it, it fell on deaf ears. The Gurdwara committee of Musourie the closest town to Uttarkhand were very skeptical, as were the Sharomani Gurdwara Parbandakh Committee, nobody would listen. He then decided to contact Bhai Vir Singh. In 1934 Sohan Singh met Bhai Vir Singh and convinced him that he had found Hemkunt Sahib.

Bhai Vir Singh offered his help to develop the site of Hemkunt Sahib. He gave Sohan Singh funds to buy material and construct a Gurdwara on the shores of the lake. Sohan Singh was accompanied by a Havaldar (army sergeant) called Modan Singh who had offered his services. A year later both of them set off again. They got a local building contractor to start construction of the gurdwara after obtaining local permission. Out of respect for the Hindu mandir that stood on the shores of the lake, it was also enlarged and improved. Such was the devotion of Modan Singh that after retiring from the army he dedicated his life to the service of Hemkunt Sahib.

In the early days there was no shelter on route to Hemkunt Sahib and Moden Singh would shelter from the fierce wind and cold weather in a hollowed out tree trunk. This tree trunk still stands in the grounds of the gurdwara of Gobind Dham. Today there is a string of gurdwaras from Hardwar to Rishkesh, Srinagar, Joshimat, Gobind Ghat and Gobind Dham where devotees can rest for food and shelter.

This 'lake of ice' is also sacred to the hill people who live in the valley below. They tell of the gods Lakshman, Hanuman, Shiva, and Vishnu, the tales of their deeds woven together with images from local landscapes. Long before the Sikhs knew the lake as the Guru's tap asthan, these people knew it as Lokpal, and made annual pilgrimages to its shore. For them, as for Sikhs, the journey continues to be an act of devotion, and the holy lake itself is a place for prayer and worship - a place where wishes can be fulfilled.