From SikhiWiki
(Redirected from Ranjit Nagara)
Jump to navigationJump to search 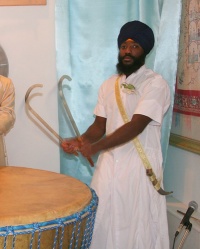 Siri Chand Singh playing the Ranjit Nagara as the Guru Granth Sahib is brought out of the Main Area of the Gurdwara.

Nagara or Ranjit Nagara: Literally: the drum (Nagara) of victorious (Ranjit) or the "drum of victory". A nagara is a percussion instrument. Nagaras are huge drums, about 2 to 3 feet in diameter, and played with sticks. The special Ranjit Nagara can be up to 5 feet across. Traditionally, Nagaras were war-drums. The thundering beat of the huge drums usually meant that the army was marching into battle. Before the advent of cannons, the drums were used as well to herald the arrival of kings and princes. Today, they are now played on festive occasions.

In 1684, Guru Gobind Singh had a special drum prepared. It was named Ranjit (the winner of the battle-field). This drum was beaten at the Keshgarh Sahib throne, at Anandpur Sahib, every day, as a declaration of the sovereignty of the Khalsa (pure ones). Guru Sahib made it obligatory that before the closing of the Gurdwara, the beating of the Nagara was mandatory. The Nagara is a symbol of the sovereignty of truth and righteousness. Only the winner of a battle could beat it. Nishan (flag) and Nagara (drum) are an integral part of a Takht (Khalsa Throne) and all the Gurdwaras.