From SikhiWiki
(Redirected from Panjokhara)
Jump to navigationJump to search 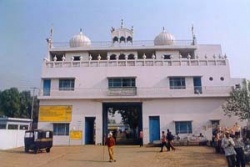 Gurudwara Panjokhra Sahib The Gurdwara is dedicated to the memory of the eighth Guru Sri Harkrishan Sahib Ji. He visited this place on his way to Delhi. It is situated on the Ambala-Naraingarh road. The Guru during his journey from Kiratpur to Panjokhra, travelled through Ropar, Banur, Raipura and Ambala. Along the way he gave the universal message of Guru Nanak, to disciples, who came to call on him. As he neared Panjokhra, a disciple spoke with humility, "Respected Sangats are coming from Peshawar, Kabul and Kashmir for Darshan. Kindly stay at Panjokhra for a few days so that they may have the chance of seeing their beloved spiritual preceptor." The Guru agreed to extend his stay in this village.

There lived a learned Pandit, Lal Chand by name, who was proud of his caste as well as of his learning. He came to see the Guru with devotion and asked, "It is said that you sit on the gaddi of Guru Nanak, but what do you know of the old religious books?"

By chance Chhaju Ram, an illiterate dark-skinned village water carrier happened to pass by at that moment. Guru Harkrishan asked one Dargah Mal to call him. As Chhaju Ram came, the Guru enquired if he would explain to the Pandit the gist of Bhagavatgita. Saying so, the Guru placed his stick over the head of the water carrier, who astonished every one by giving a convincing commentary on the sacred book. Lal Chand's pride was overcome. Humbly he fell at the Guru's feet. Both he and Chhaju Ram became the disciples of the great Guru and traveled with him up to Kurukshetra.

It is said that Pandit Lal Chand entered the fold of Khalsa, in Guru Gobind Singh's time and took the name, Lal Singh. He met with a hero's death fighting in the battle of Chamkaur, on December 7, 1705.

According to historical records, Guru Harkrishan on reaching village Panlokhra, made a boundary of sand and said that any one who wanted to see him, should stand there, make his supplication and he would have his desire fulfilled. A shrine has been built at the site. *There are many shrines in and around Kurukshetra connected with Gurus. The place has been visited by Guru Nanak, Guru Amar Das, Guru Har Rai Sahib Ji.

Gurdwara Sri Guru Har Krishan Sahib Ji - 10 kilimetres northeast of Ambala City along the Ambala-Naraingarh road, marks the spot consecrated by Guru Har Krishan, by his stay during his journey from Kiratpur to Delhi in February 1664. The Guru had been summoned to meet the Emperor Aurangzeb. A large number of his followers, disturbed by summons from one known to be a bigoted tyrant, had followed the young Guru. As the caravan arrived at Panjokhara at the end of the third day of their journey, the Guru told them all except a few on the household staff to go back to their homes with a firm belief in the rightness of divine dispensation. There lived in Panjokhara a Brahaman, Krishan Lal or Lal Ji, who was proud of his learning. Seeing the young Guru, he sarcastically remarked that the boy who bore the name of Krishna could not even read Krishna's Bhagwad Gita. Guru Har Krishan simply smiled at the Brahman's impudence and, calling a passerby, Chhajju the water-carrier, made the latter give a discourse on Gita. Such was the erudition of Chhajju that Lal Ji Pandit bent his head in shame and besought the Guru's forgiveness. The Guru resumed his journey after three days stay at Panjokhara. A small memorial raised in honor of the Guru was developed into a Gurdwara during the Sikh Rule, and during the past decade or two has become a vast complex including the double-storey sanctum entered through a spacious hall, Guru ka Langar with a vast dining hall, and enclosed sarovar and ancillary buildings for staff and pilgrims. Besides largely attended Sunday morning congregations, an annual fair is held on Magh Sudi 7 to 9 (January - February) commemorating the days of the Guru's stay here over 300 years ago.

Guru Hargobind, Guru Tegh Bahadur and Guru Gobind Singh. Of all the places of pilgrimage here, Brahmsar is considered the holiest. It is said that here Brahma performed yagna. Bathing in the tank on the day of solar eclipse,gives a person the benefit of a thousand Ashwamedha yajnas. On the north-western end of the tank, stands a Gurudwara. It was built to commemorate the visit of Guru Gobind Singh. Another Gurdwara dedicated to sixth Guru Sri Hargobind stands close to another holy tank,called Sannihit tank. There are many other shrines associated with Gurus. When Guru Hargobind visited Kurukshetra on the occasion of the solar eclipse, he met many Bibeke Sikhs who were holding congregations. He was much pleased to see that they were, able to grasp Guru Nanak's message according to his teachings. Thousands of Hindus and Sikhs visit holy Kurukshetra on the occasion of Kumbh mela on solar eclipse. Here Lord Krishna gave the message of the celestial song called Bhagavatgita to Arjuna before the commencement of the Mahabharata war. Haryana Tourism has set up a tourist complex at Pipli near Kurukshetra Railway Station. It provides facilities to tourists and pilgrims. Besides there is a restaurant, and spacious lawns for garden parties. This historical place is 152 Km from Delhi.