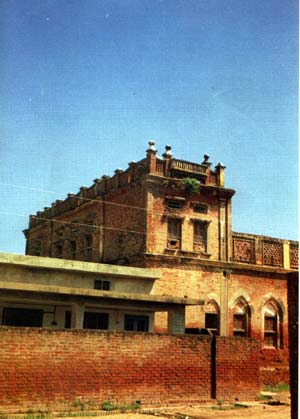 Gurdwara Panjvin Patshahi, in the village of Chak Ram Das has now all but dissappeared. Once a beautiful Gurdwara stood here built in the memory of a visit to the area by the Fifth Patshah Guru Arjan Dev Ji who was drawn to the area by the love and affection of his local devotee, Bhai Prana.

There was once a chaubara in front of this place which the local people now call the 'Guru Da Mahal' (the Guru's Palace). 40 ghumaon of land were granted to the gurdwara by the Sikh rulers; no revenues are owed on the land which curently is in the custody of the Auqaf Department.

After the Partition the communal violence which erupted resulted in the local Sangat seeking the safety of the Indian part of Punjab. The Gurdwara without its worshippers and their seva to tend to its upkeep slowly returned to the elements from which it had been lovingly assembled.

Chak Ram Das is in Wandhu police station of Gujranwala district. Located 20 kilometer east of Eminabad it lies on the Eminabad-Mianwali Bungalow road.

Guru Arjan Sahib Ji was greatly attracted to this place because of his love of Bhai Prana.A beautiful Gurdwara was built there in memory of Guru Sahib but because of the neglect of Sikh religious organizations, this Gurdwara Sahib has disintegrated.