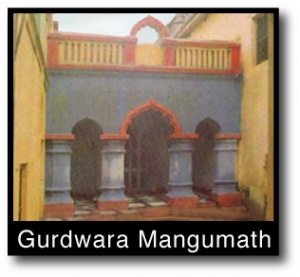 Puri, commonly called Jagannath Puri after the famous Hindu Temple of Jagannath, was visited by Guru Nanak Dev in 1509 during his eastern travels. He preached against idolatry and exhorted the people to sing praises of the One God, who is Formless and yet all forms are His. Gurdwara Baoli Sahib and Mangu Math served by Udasi priests commemorate the Guru's visit. These were first established by Bhai Almast, the notable Udasi preacher, during the middle of the seventeenth century.

Guru Nanak during his travels came to Jagan Nath Puri. It is a very important place of pilgrimage for Hindus, situated on the sea shore, touching the Bay of Bengal. Lord Krishna and Vishnu are worshipped here as Jagan Natha, the Lords of the universe. Here a special kind of idol worship is performed with the usual formalities. It is known as Aarti. It is said that in the evening when the priests performed Aarti, Guru Nanak stood there as a silent spectator as if nothing was happening. He came out in the open and sang the following hymn:

"The entire sky is the silver plate. The Moon and the Sun are lamps. The luminous stars are studded in it like jewels. The wind was the scent of all flowers on earth. Thus worship performed, O Thou the destroyer of births!

At the place where Guru Nanak sang the above mentioned hymn, a Gurdwara called Mangu Math now stands in his memory.

A Gurdwara Mangu Math stands near the Jagannath temple in the memory of the Gurus visit there. There is a well of water near the sea shore; the water from this well was used by the Guru during his stay there. This is the only well which has sweet and palatable water. This Located next to the Emar Math, this math is associated with the Guru Nanak sect. The math provides a sacrificial ram to be offered to Goddess Bimala on the annual Maha Navami night. Baaul Math is an Another math of the Guru Nanak sect. 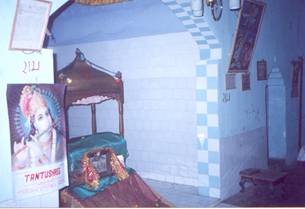 The Udasi (non-Sikh) caretaker told me the story that Nanak Dev had gone into such deep meditation (samadhi) that on the third day Lord Jagannath got worried about losing his status. Jagannath himself walked from his temple to meet Nanak. That is why his idol sits next to the Adi Granth. It was quite dark when the caretaker showed me the steps going deep down to a well (Baoli). So I did not test the freshness of its water. There is a legend associated with this well.

One morning Guru Nanak went on the seaside for a stroll. There were many people bathing, just as the pilgrims do now in their customary fully attired manner. His companion, Mardana, felt thirsty. The water all around was insipid. The Guru with his staff dug up the sand near him and there appeared a spring of cool drinking water, from which Mardana drank to his satisfaction. It would be interesting to find out why the surface of well water is now so much below and far from the seashore.

The caretaker did not know what to do with the book that I handed him. May be I should have taken time to go to the other Sikh Temple known as "Mangu Math"building composed of two small rooms one housing the Sikh Adi Granth and the other on the left displayed Lord Jagannath's idol.