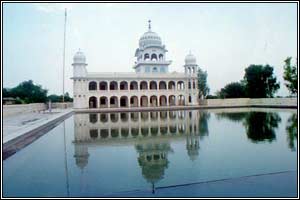 Gurdwara Lohgarh Sahib is situated in the village Dina, 15 km south of Nihal Singh Wala, in the Moga district of Punjab. It is on Barnala Nihal Singh Wala road, which is a single metaled road in good condition. It is 6 km from Salatwatpura, 12 km from Nihal Singh wala and 13km from Bhadaur.

Guru Gobind Singh Ji, after evacuating Anandpur Sahib in December 1705 A.D, came here and stayed for a few days. Guruji was served with devotion by Chaudhari Shamir and Lakhmir, grandsons of the local chief Rai Jodh who fought on the side of Guru Hargobind Ji in the battle of Mehraj in December 1634. Guruji enlisted several Sikh warriors of the Brar clan. It was at this very place that Guruji wrote the famous letter in the Persian language “Zafarnama” to Emperor Aurangzeb.

The place mentioned in the Zafarnama is however, Kangar, 2 km south of Dina. The commemorative shrine established here is named Gurdwara Lohgarh Sahib. He dispatched Zafarnama lit. Letter of Victory through Bhai Daya Singh Ji and Bhai Dharam Singh Ji, two of the five Panj Piaras to Emperor Aurangzeb who had shifted from north to the Deccan since 1681 to establish his new capital.

Besides the daily services and observances of the major Sikh anniversaries, a religious fair is held here every year on the occasion of Maghi, which corresponds with dates 13th to 14th of January. In addition Prakash Divas of Guru Nanak Dev Ji and Guru Gobind Singh Ji are celebrated with enthusiasm. Jor mela along with Nagar Kirtan are also organized in a big way over here.