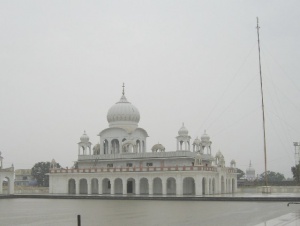 Guru Nanak Dev Visited this place from Haridwar via Saharanpur in the year 1584 Bikrami on Katakk's full moon while blessing the people. During Guru's journey, a merchant offered food to all the saints. When everyone sat in queues, a child took birth at the merchant's house listening to which the saints stopped eating food due to Sootak (a period of 13 to 40 days after childbirth). Guru Nanak Dev Ji then said:

If one accepts the concept of impurity, then there is impurity everywhere. In cow-dung and wood there are worms. As many as are the grains of corn, none is without life. First, there is life in the water, by which everything else is made green. How can it be protected from impurity? It touches our own kitchen. O Nanak, impurity cannot be removed in this way; it is washed away only by spiritual wisdom. ||1|| (Guru Granth Sahib Ji, Ang 472)

Guru Gobind Singh also visited this place after the battle of Bhangani in 1679 A.D. ,on his way to Paonta Sahib. He stayed and worshipped here for 52 days. His soldiers cleaned their weapons and tested them to meet future challenges. Here the great Guru distributed awards and Saropas to brave soldiers who distinguished themselves in the Battle of Bhangani. He also exhorted his followers to maintain the sanctity of the sacred place. He gave a copper plate having his signature as memento to the Chief priest of Kapal Mochan. A Gurudwara stands near this tank in his memory.

The Birth Anniversary of Guru Nanak Dev on Katakk's full moon is celebrated with great joy & enthusiasm. The followers come from far off places to visit the place & get their wish fullfilled by taking a dip in holy water of the Sarovar.