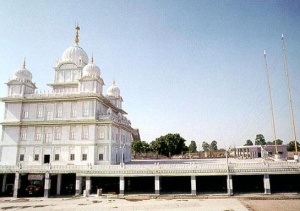 Gurdwara Data Bandi Chorh Sahib, situated in Gwalior, is associated with the imprisonment of Guru Har Gobind Sahib in Gwalior Fort and his celebrated release in which he managed to win the freedom of 52 Rajas (Kings) who had long suffered imprisonment in the Fort. The word "Bandi" means "imprisoned", "Chhor" means "release". For further reading see Bandi Chhorh Divas.

Pilgrims from all over the country visit this Gurdwara to pay homage to Guru Hargobind.

During October/November, the worldwide Sikh Sangat (community) celebrates the safe return of the sixth Nanak, Guru Hargobind from detention from Gwalior Fort in about October 1619. The day coincides with the Hindu festival of Diwali , ("the festival of lights"). This concurrence has resulted in a similarity of celebrations amongst Sikhs and Hindus. 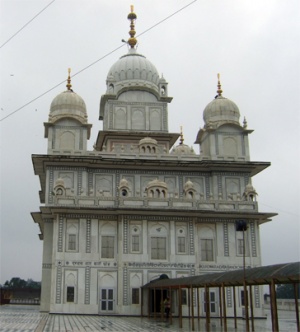 The most familiar version has Emperor Jahangir being warned by Murtaja Khan, Nawab of Lahore, who noticed that Guru Ji had constructed the Sri Akal Takhat Sahib, 'The Throne of the Almighty', at Amritsar, and was also strengthening his army, he informed the Mughal Emperor Jahangir about this incorrectly, emphasizing that the Sikh Guru was making preparations to take revenge for his father's torture and martyrdom. When Jahangir heard about this he at once sent Wazir Khan and Guncha Beg to Amritsar in order to arrest Guru Hargobind Sahib Ji. Given the severity of the brutal torture inflicted on Guru Arjan, Jahangir would have had ample reason to believe that the young Guru was coming for his head.

But Wazir Khan, who was an admirer of Guru Hargobind, requested the Guru to accompany them to Delhi telling him that Emperor Jahangir wanted to meet him. Guru Sahib accepted the invitation and soon reached Delhi. However Guru Hargobind was a man totally assured of himself who by his mere appearance and evident holiness charmed Jahangir and his wife Noor Jahan (said to be the real power in Jahangir's Darbar.) . But the same evil men who had plotted the arrest and torture of Guru Arjan hatched a plot aimed at similar fate for Guru Hargobind. In this well told version Jahangir falls terribly ill, his Astrologers predictions end with Guru Hargobind seemingly a prisoner in Gwalior Fort whose prayers are the only cure for Jahangir. The Sikhs, after the Martyrdom of Guru Arjan, fear the worst, but the Guru is not worried in the least, even as the same powerful Hindu Courtier Chandu Shah planned his death.

There are at least three other versions of the Stay of Guru Hargobind at Gwalior Fort.

In these versions the Guru is actually arrested and has not first become the guest of Jahangir and Noor Jahan, or traveled to the fort at the Emperor's request to Pray forhis recovery from a mysterious malady.

However, except for the arrest, illness and friendship, the details are all the same.

In the following version the Emperor without meeting the Guru calls for his release on others' recommendations, drops a huge fine he had imposed and doesn't get upset by the Guru's, (who he has not met) outsmarting him and causing him a considerable loss of 'Royal' face by his clever adaptation of the wording of the Emperor's orders by adding 52 tails or ribands to his cloak to outwit the Emperor. Somehow later, dispite this 'pulling of the wool over his eyes' the Emperor invites the son of the murdered Guru Arjan to hunt with him on a royal shikar. Maybe as some say he had wanted to avoid killing the young Guru outright and schemed to have Guru Hargobind die from some 'friendly fire' while hunting a ferocious man eating tiger. And to think they called him Jahangir the Just. 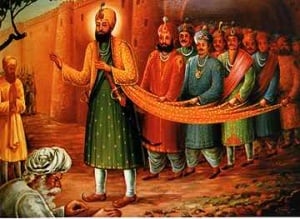 Sri Hargobind the sixth Guru was detained in the Fort of Gwalior by the order of Emperor Jahangir. The cause of detention, it is said, was that fanatical Muslim officers, particularly those under the influence of the Naqshbandi cult, were alarmed by the Guru's new policy of militarization. They poisoned the mind of Jahangir, who, otherwise, about that time had a soft corner for the Guru. (One wonders why he would have a soft spot for the Guru, unlike his subordinates). He was summoned to Delhi and was asked to pay a fine of rupees two lakhs which had been imposed on his father and which the latter had refused to pay. As Guru Hargobind showed little inclination to pay the fine, he was sent for detention to Gwalior Fort where the Mughal Emperors kept their political prisoners. Obviously the cause of detention was political as it was a political prison. Non payment of the fine was merely an excuse. The 52 Rajas were there for their failure to pay tribute monies to the Mughal rulers.

According to Sikh chronicles, the detenition was for a period of 40 - 60 days. 60 days seems more likely. The persuasive efforts of Bhai Jetha at Jahangir's court and maybe the exercise of influence with the Emperor by the Muslim saint Hazrat Mian Mir, a friend of Guru Arjan, brought an early end to his detention. The release came in the nature of a general amnesty which also brought the end of the imprisonment of the 52 Rajas who had been kept there. The Guru came to be known as 'Bandi Chhor' The Grand emancipator. (This version gives no reason for the Guru having anything to do with the Rajas' release.) 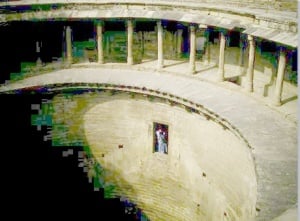 Guru Hargobind ordained Sikhs to arm themselves to resist injustice and tyranny. This annoyed Emperor Jehangir who ordered the incarceration of the Guru in the Gwalior Fort. Soon realising his mistake, (for whatever reason) the Emperor ordered his release but the Guru refused to accept the offer till 52 innocent 'Rajas' were also freed. Instructions were issued that whosoever held onto the Guru's clothing would be freed. Guru Ji wore a special apron with 52 strings attached to it. Each Raja held one string and walked out to freedom. (Here one has to wonder why the Emperor would ever think of this as a mistake, unless he was expecting only ten or twelve men to be able to hold onto the Guru's clothing)

Gwalior is a well-known city, 120 kilometres south of Agra and well connected by rail and road. Its historical fort built atop a hill is a prominent landmark overlooking the town below. 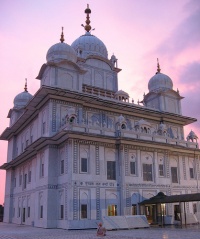 Mughal rulers used this fort as a prison for chiefs and nobles of status. Emperor Jahangir ordered the incarceration of Guru Hargobind here at the instigation of the Guru's detractors. However, when the Sufi Saint Mian Mir and other sympathizers interceded, the Emperor ordered the Guru's release. When the imprisoned nobles heard of his release, they looked up to him for his assistance as a man of God, pious as well as brave. Guru Hargobind refused to be released unless the other internees were also let out. The emperor agreed to release as many of them as could come out holding the fringe of the Guru's robe. The Guru, narrate the chroniclers, had a long robe made with many strings attached to it which enabled all the fifty-two captives to come out of the fort with him.

This earned for the Guru the epithet Data Bandi Chhor, lit. the munificent liberator. Chroniclers differ about the dates and duration of the Guru's detention. But it appears that it was only for a few months sometime between 1617 and 1619.

A shrine bearing the name was established inside the fort. It was looked after by Muslim priests until the Sikhs acquired possession and established a Gurdwara after the Independence in 1947. The original shrine in the form of a marbled platform is still maintained near the entrance to Gurdwara Data Bandi Chhor Patshahi 6 Guru Hargobind Sahib Ji, as it is now named. The present building complex spread over six acres was constructed under the supervision of Sant Jhanda Singh and Utam Singh Mauni of Khadur Sahib during the 1970s and 1980s. The principal building is a six-storey edifice near the old shrine. The sanctum is on one side of a high-ceilinged, almost square hall on the ground floor. There is a basement below of the same size as the hall and four storeys of room above the sanctum. Guru ka Langar with its vast dining hall and residential rooms for staff and pilgrims are in a separate, adjoining compound. It is a peculiarity of this Gurdwara to have two sarovars, one for women the other for men.