From SikhiWiki
(Redirected from Gurudwara Bari Sangat, Kolkatta)
Jump to navigationJump to search 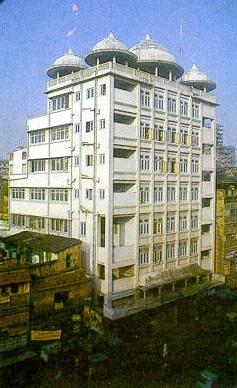 Gurdwara Bari Sangat is the most notable historical Gurdwara in Tullapati Cotton Street, In Kolakata(West Bengal). The Gurdwara was visited by Guru Nanak Dev & Guru Tegh Bahadur during his Travels.

On his return journey from Dacca to Punjab, Guru Nanak went to Calcutta. He stayed at a place called Ban Sangat where a Gurdwara has been built in his memory. During his stay here he met the ruler, Raja Bahadur Singh. The Raja was greatly impressed by the teachings of the great Guru. He raised a shrine in memory of the Guru. It is said that Guru, Tegh Bahadur during his journey of Bengal and Assam1 also stayed here. Thus the shrine was doubly blessed by the visit of two Gurus.

The site formed part of the estate of Raja Hazuri Chand, who built and maintained it. After his death his daughters Shyam Kaur and Lila Kaur continued to look after it. Later, however, the management fell into incompetent hands. A management committee was formed in 1259 Fasali (A.D. 1852). It improved the condition of the Gurdwara, but mismanagement again set in in the beginning of the 20th century. Between 1910 and 1922 the Gurdwara building and property were mortgaged four times, everytime for a higher amount. A new 16 member's management committee was formed in April 1920. In December 1920 it was decided to hand over the Gurdwara to the newly formed Shiromani Gurdwara Parbandhak Committee at Amritsar. Sardar Sundar Singh Majithia and Bhai Mohan Singh Vaid served on the local managing committee during 1923-25, but the finances of the Gurdwara showed no sign of improvement and the S.G.P.C. refused to take over the Gurdwara. Meanwhile the last mortgagee went to court which decided, on 11th December 1929, that unless the dues were cleared within six months, the Gurdwara would be auctioned. This was, however, avoided as a result of mutual understanding between the parties. The debt was ultimately cleared by April 1937 and since then the Gurdwara has been functioning well.