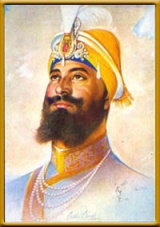 Guru Maneyo Granth (English: Consider the Granth to be the Guru), refers to the historic statement of the 10th Sikh Guru, Guru Gobind Singh Ji (1666–1708), shortly before his death affirming the sacred text, Adi Granth, as his successor, thus terminating the line of human Gurus. Installed as the Guru Granth Sahib Ji, it is now the central text of Sikhism, and the eternal Guru of all Sikhs. It is central to Sikh worship as it is said to imbibe a living spirit of the Ten Sikh Gurus. [1].

A Rehitnama is a Hukam or Order, of the Guru which has been scribed by the Sikhs who were close to the Gurus at the time. Just as a Judge announces a judgement but the the Recorder or Secretary records the judgement on paper, similarly Rehitnamas are the judgements and instructions of Guru Sahib which have been scribed and recorded by the Gursikh companions of Guru sahib at the time.

The event on 20 October 1708 at Nanded (in present-day Maharashtra), when Guru Gobind Singh installed Adi Granth as the Guru of Sikhism, was recorded in a Bhatt Vahi (a bard's scroll) by an eyewitness, Narbud Singh,[2][3][4], and is now celebrated as Gur Gaddi (Guru Gaddi Divas), and statement is part of the central chant, "Sabh Sikhan ko Hukam Hai, Guru Maneyo Granth" [5]. The month of October in 2008 marked the tercentenary year of Guruship of Guru Granth Sahib and was marked by major celebrations by Sikhs worldwide [6], and especially at Takht Sri Hazur Sahib, Nanded saw year long celebrations [7]. 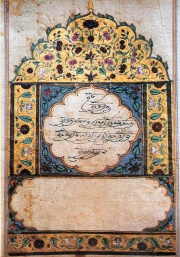 Illuminated Adi Granth folio with nisan of Guru Gobind Singh. The manuscript is of the Lahore recension, late 17th to early 18th century.

The composition of this sacred Granth contains the Bani of six Gurus of the Sikh faith and some Bhaktas and saints. It was composed in this form in the year of 1604 with the addition of Guru Tegh Bahadur's Bani (sacred composition). And its blessings are sought by the seeker who has a devout heart. The Sikh religion sincerely believes that in each of the succeeding Gurus, the spirit of Guru Nanak Dev Ji was present.

The sacred Granth is installed in all Sikh holy places of worship and treated as presiding presence of Guru, an apostle of Divine Truth. The devotees of congregation in solemn assembly pray and seek blessings of the Supreme. This comes through in the mystical thought of Gurbani and it stands for realization of the Truth. The Gurus' word, known as 'sabad' is taken as the mystic thought of Guru.

In the words of Bhai Gurdas, a great scholar of Guru's time, "In the word is the Guru, and the Guru is in the word (sabad). In other words, the human body was not the Guru but the light of the word (shabad) and within the heart was their real personality." When the human mind dives deeper and deeper into the Guru's word, all mental impurities depart and wisdom of the Guru draws on the human soul. Thereby the devotee attains the divine light and wisdom which makes him to contemplate on God's name (naam). In the light of above realities, the Sikh religion makes the holy Granth as a living master of Sikh Panth.

Before setting for heavenly abode, Sri Guru Gobind Singh, the tenth Guru, the founder of order of Khalsa brotherhood, conferred the Guruship to Sri Granth Sahib as a living Guru of Khalsa. He then sang his self-composed hymn:

"Under orders of the Immortal Being, the Panth was created. All the Sikhs are enjoined to accept the Granth as their Guru. Consider the Guru Granth as embodiment of the Gurus. Those who want to meet God, can find Him in its hymns. The pure shall rule, and impure will be no more, Those separated will unite and all the devotees shall be saved."

He also offered his obeisance to the sacred Granth. This historic development took place in Oct. 1708 which ensured that the order of Khalsa brotherhood always remained an abiding force for Sikh Panth unity.

Preparations are in full swing at Hazoor Sahib, Nanded to commemorate this historic occasion in a befitting manner. Sikh gentry all over the country and abroad are going to celebrate this occasion with great eagerness and vigour.

First part of the Dohra

The first part of the Dohra is Guru Gobind Singh Ji's Pavitar Bachan (Holy Saying) recorded in BHAI PRAHLAAD SINGH's Rehitnama. This was written at the time when Guru Ji said this bachan by Bhatt Vehi who was one of Sri Guru Gobind Singh Ji's poets at Hazoor Sahib. Giani Gian Singh later found it and copied it ino his literature's "Twarikh Guru Khalsa" and "Panth Parkash":

Second part of the Dohra

"The Sikh people shall remain free and sovereign, always, non-challenging this position. For, all shall realize, after bitter frustration, that there is no redemption except in the way of the life that the Khalsa upholds!"

Third part of the Dohra

There are some minor differences in some words in the various sources which have recorded Guru Gobind Singh jee's bachan used in the Dohraa which we sing, due to the language and writing style of the scriber. However, the ESSENCE and MESSAGE is all the SAME.

Bhai Prahlad Singh was a Sikh from Guru Gobind Singh ji's time and the Dohra he wrote was:

Please note that Bhai Prahlad Singh wrote that Guru Granth Sahib is the Guru, but the Deh (body) of the Guru is the Khalsa. (As Guru Gobind Singh himself said that 5 Khalsa's - Panj Pyare are equal to the Guru)

It was only in the later rehitnamas ( in fact during the late 1700s when the Khalsa did not have the control over the Gurdwaras) that we find the line as Guru Granth ji maneyo pragat guran ki deh ... One of the cause of this is understood by researchers is that many shradhaloo hindus and pandits were serving at these gurudwaras and they (consciously or unconsciously) brought in the hindu Idol worship into simple Sikhi. Because if you start considering Guru sahibs saroop as a body :"DEH" then we will start putting bhog of food , ac rooms , rajaiyan over guru sahib etc etc.....I just hope we just don't start giving Ishnann to guru sahib one day !