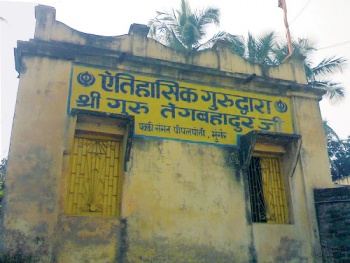 Gurdwara Pakki Sangat - Monghyr, a district town, 170 kilometres east of Patna Sahib by rail, is another place where Guru Tegh Bahadr is known to have stayed during his eastward journey. It was during his stay here that he got the news of the birth of Guru Gobind Singh. The commemorative shrine Gurdwara Pakki (lit. firm or permanent) Sangat is in Belan Bazar area near the ld fort. Its old building also damaged badly by the 1934 earthquake was, however, rebuilt within a year. It is a rectangular room with a verandah in front and is served by Brahaman priests. Two relics, a cot and a pillow said to have been used by the Guru during his stay here, are kept in the same room where Guru Granth Sahib is seated.

Patna, the state capital of Bihar, is an important place of pilgrimage for the Sikhs, since it was at Patna City that Guru Gobind Singh ji was born. Since his birth the place has remained an important destination for Sikh pilgrims from all over the country. It is, perhaps, not known by many that the father of Guru Gobind Singh, Sri Guru Tegh Bahadur ji, the 9th Guru and martyr, while on his way to Assam, had chosen to stay, at Munger in a Temple on the Piparpanti road (now just opposite the city's Dak-Bungalow/Post Office) for a few days on Magh 1724 Vikrami. Munger is along the River Ganga 174 Km to the east of Patna.

Raja Ram Singh was given the dubvious priviledge by Aurangzeb, of leading a contingent of Mughal troops to Assam to bring the ruler of the country back under Mughal suzerainity. The assignment was really more of a punishment for having allowed the wily Shivaji Bonsali to escape from Aurangzeb's control. Fearful of the "famed magical powers" of the Assamese shamen he asked Guru Teg Bahadur, who he ran into at Munger, to accompany him to Assam. As the Guru had long planned to visit the area where Guru Nanak had visited, he gladly agreed to accompany him.

It is on record that from here the Guru wrote a letter to his wife Mata Gujri Ji at Patna, who was awaiting the delivery of their expected child. As fate would have it the child was a male whom they named Gobind Rai. The young child who would one day create the Khalsa and pass the Guruship to the SGGS.

The Temple, which has now been converted into a gurudwara is now gaining importance for the local Sikh population.

Just to the south of Munger there is a big Gurdwara at Jamalpur, which serves as a place of pilgrimage and Sikh congregation on days of important Sikh festivals such as the annual Baishakhi Day and others.

At Jamalpur one of the important roads is also known as Gurdwara road.

By Road it is about 174 Km from Patna to Munger. 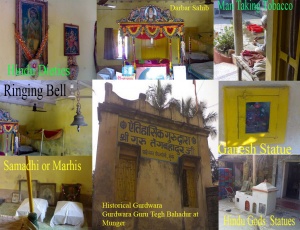