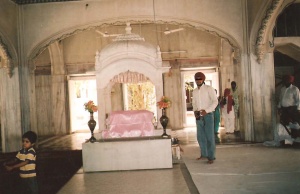 Gurdwara Gau Ghat or Gurdwara Pahila Bara is a historical Sikh shrine situated at Alamganj mohalla in Patna. This was Bhagat Jaitamal's house. It was sanctified first by Guru Nanak in 1509 A.D. and later by Guru Tegh Bahadur along with his family in 1666 AD. It is about 4 kilometers from Harimandir Sahib, on the Ashok Raj Path, Alamganj amidst the Patna Railway Junction and Takhat Sri Patna Sahib Gurudwara Gau Ghat Sahib is the oldest Gurudwara than Takhat Shri Hari Mandir Sahib Ji Patna Saheb. 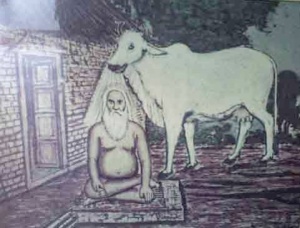 On the banks of the River Ganga, once the house of Bhai Jaitamal, the First Master, Guru Nanak Dev in 1509 A.D, sanctified Gurudwara Gai Ghat.

Bhai Jaitamal, a man of great piety was 350 years old when he requested the Guru to secure his soul. Guru Nanak counselled patience and advised him to wait till the ninth Master blessed him. Jaitamal was much old for bathing in the River Ganga, but with the blessings of Guru Nanak he could.

"Bhai Jaitamal prayed to the Guru to give him strength to bathe in the river ganga. Guruji told Jaitamal that he need not go to the river; the river would come to him. Guru Nanak converted the river Ganga to a cow. The spot is still there where Bhai Jaitamal used to bathe," Avtar Singh, the priest of Gurudwara Gai Ghat.

In 1666, the ninth Master, Guru Tegh Bahadur blessed Bhai Jaitamal. The guru, along with his family stayed in Patna for four months and made the place popular among the followers of Guru Nanak.

The gurudwara preserves many sacred relics such as the bed, a grindstone of Mata Gujri, the musical instrument, Rebeck of Bhai Mardana, the window of the house of Bhai Jaitamal and Thara Sahib where Guru Tegh Bahadur sat. 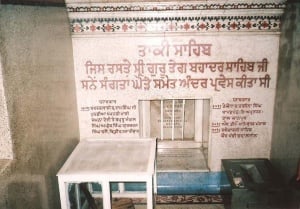 Devotees offer chola or clothes at Tham Sahib, the wooden pillars. It is believed that an unequal pair of wood was brought for the construction, which was later corrected by the Guru Tegh Bahudar. Since then, devotees pay obeisance to the pillars.

"If someone finds it difficult to marry or secure a job, his wishes are fulfilled. An offering of Chola (a piece of cloth) is made to the Tham Sahib. Hindus, Muslims and people of all religions come here and each has his wish fulfilled," said a devotee.

Ghanshyam, the great grand son of Adhrakha, the fourth successor of Salis Rai Johri's Sangat (now the birth place of Guru Gobind Singh ji) was also fortunate to get blessings from the ninth successor of Guru Nanak, as it was assured by Guru Nanak during his visit to this place. 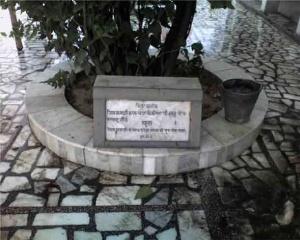 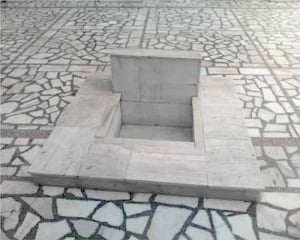 Guru Tegh Bahadur Ji with his family and some selected followers started journey towards east. Guru Tegh Bahadur Ji with his family and sangat reached Bhagat Jaitatmal Ji’s village Bishambarpur and called him & knocked his door. But all the doors of his house were closed because neighboring children and young were making a noise at his home which placed hindrance in his worship. One window of that house was open from where sangat called Bhagat Ji Maharaj, Guru Ji has arrived, please open the door. Bhagat Ji replied if Guru Ji has arrived then he can come in without opening the door. Hearing that Guru Ji with his family and sangat ride on the horse and went inside through the open window in incredible way. He tied his horse with the rope and seated on the Guru Nanak Dev Ji’s place. Bhagat Jaitamal Ji saw Guru Nanak Dev Ji in the form of Guru Tegh Bahadur Ji. Seeing him Bhagat Jaitamal Ji got freedom from mortal world according to the spiritual words of Guru Nanak Dev Ji. 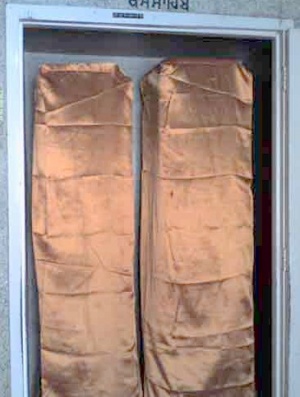 Next day Guru Ji said to the labors that tham are not short. When labors tried to fix the tham then thumbs turned long and when put again on the earth tham (pillar) became short. Labors were amazed to see that. Guru Ji asked the labors to leave that construction incomplete and said that a time would come when Sikh sangat would itself complete this construction. Now these thumbs would be known as Tham Sahib. If a person with complete faith embrace these thumbs then his wish will be fulfilled. Incurable people will be cured and the mothers who don’t have child, their desire will be fulfilled. Saying that Guru ji left for the Assam with King Bishan Singh.

The following things are preserved here:

This place was first known as Sangat and later popularized as Badi Sangat Gau Ghat.. Located at the confluence of the Ganga, the Sone, the Punpun and the Gandak - Patna is the largest riverine city in the world. Sprawled on the southern banks of the River Ganges, Patna offers visitors a fascinating tale of history.