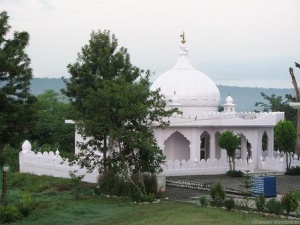 Gurdwara Dasvin Patshahi, a memorial shrine west of the town of Nadaun on the bank of the Beas River, is located at the site of a battle in which Guru Gobind Singh and his Sikh forces assisted Raja Bhim Chand of Kahlur and some other hill Kinghs against the Mughal general Alif Khan. Alif Khan had been sent to collect tributes to the Mughal Emperor wich were several years in arrears and in great need to support the war of attrition that Arangzeb was waging against the Marathas in the Deccan. The battle was fought on 20th March 1691. Guru Gobind Singh described the action in his, Bachitra Natak in vivid and rousing verse. Telling us that Alif Khan fled in utter disarray "without being able to fold up his camp."

Guru Gobind Singh camped at the site, for several days, at which spot Maharaja Ranjit Singh, ordered a Gurdwara to be built. However, the present building was constructed by Rai Bahadur Baisakha Singh in 1929.

The Gurdwara Sahib was taken over by the S.G.P.C. in 1935 and is administered by it through a local committee.