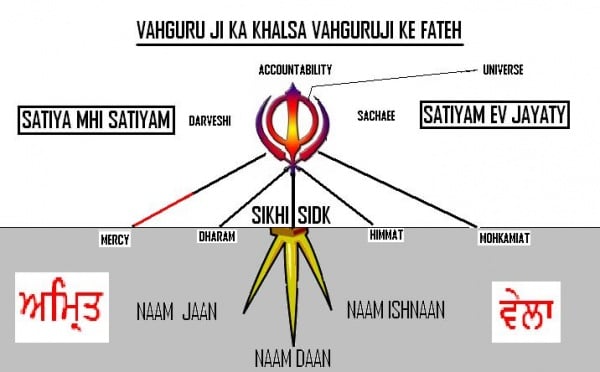 KHALSA: ETERNAL IDOLs of TRUTH in Realm of TRUTH

Satgur does not perish, so we do not grieve.

There is no other Destroyer than TRUTH.

Satgur is not bound, so ...we are not in bondage.

Satgur has no occupation, so we have no entanglements.

Satgur has no anxiety, so.. we have no cares.

Satgur has no stain, so ....we have no pollution.

SatTRUTH has no hunger, so ...we have no thirst.

Since TRUTH is immaculately pure, we correspond to Him. ||3||

We/Khalsa/Hm Log/ are nothing; Lord TRUTH is the One and only. Before and after, TRUTH alone exists. O Nanak, Lord TRUTH has taken away my doubts and mistakes;

GOD, who is GURU as Well, blesses Us with TRUE IDEAs during amrit v'la


As per Sikh thinking there is no difference between....

Khalsa, a true soldier of the order of Khalsa, is a saintly person, a true saint & a mighty warrior, a powerful Super WoMan. A person who can restrain the natural outgoing tendency of the mind and the senses. SHe is a seeker after nothing but TRUTH. Through self discipline SHe enjoys eternal bliss and is ever immersed in perennial peace. SHe lives Truthfully reletlessly stays pitted against Falsehoodin order that the good and innocent 'Have Nots' of the world might live in peace, and enjoy he bliss of being human beings .

The self of a Human being is the fountain-source of immortality, eternal bliss and enduring tranquality. Let we human beings honour the universal self of any one who is a human being, the TRUE Idol of GOD.

....appy patti kalam aap upper lykh ve tu.......( O Nanak! these lines are being written not by me, but by you(read TRUTH) on the heart of your own IDOL of TRUTH (read Humanity alias GOD) & on the hearts of TRUE IDOLs of GOD (read Humanity)

Are you impatient & dying to seek & indulge in the blissful game of love with Humanity (read God), then join the lifelong walk with me on

as a daredevil whose best friend be no one but my own best friend, DEATH.--First Nanak in Bani

(any one there to dare on this path of TRUE Sikhi.??). Register Yourself Here (Just write your name under appropriate heading & tell the whole world that you have joined the order of the Order of the Khalsa & you are an amrit Vela Dhari on your path to TRUTH god.)

Hm Log through the grace of SatGurBani are dedicated to crafting nothing but TRUE IDEAs on our way to TRUTH(read God).