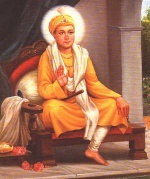 Every year on 23rd July, the Sikhs celebrate the birthday of their eighth Guru, Guru Har Krishan - also fondly called "Bal Guru" ("Child Guru") as Guru ji attained Guruship at a young age of just over 5 years old. Each year during late July, huge celebrations are held at Gurdwara Bangla Sahib in Delhi, India to commemorate this auspicious day. It was at this location in Delhi where Guru ji stayed at Raja Jai Singh's bungalow during the reign of Mughal Emperor Aurangzeb.

Guru Har Krishan was born on July 7, 1656 at Kiratpur Sahib, Punjab, India and was the second son of Guru Har Rai and Mata Krishan Kaur Ji. When the Guru came to Delhi, he stayed at the bungalow of Raja Jai Singh. There was a severe smallpox epidemic and many thousands of people were dying. By Guru's blessing, the pool at Bangla Sahib, which is built at the site of Raja Jai Singh's bungalow provided cure for thousands of suffering people. Gurdwara Bangla Sahib is thus blessed by the healing powers of this eighth Sikh Guru. The tenth Sikh Guru, Guru Gobind Singh wrote in his famous "Vaar Sri Bhagauti Ji Ki" – "Remember Sri Harkrishan, whose vision dispels all pains". This shrine is not only visited by thousands of Sikhs but also people of other faiths. .....More