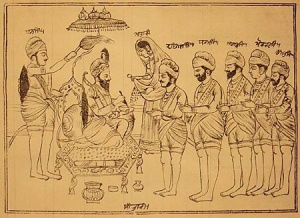 On Baisakhi Day, March 30, 1699, hundreds of thousands of people gathered around Guru Gobind Singh divine temporal seat at Anandpur Sahib. The Guru addressed the congregation with a most stirring oration on his divine mission of restoring their faith and preserving the Sikh dharma (religion). After his inspirational discourse, he flashed his unsheathed sword and announced that every great deed was preceded by equally great sacrifice: He demanded the sacrifice of one head. After some trepidation one person stood up and offered himself. The Guru took him inside a separate tent. A little later he reappeared with his sword dripping with fresh blood, and asked for another head. One by one four more earnest devotees offered their heads. Every time the Guru took the person inside the tent, he came out with more and more fresh blood dripping from the sword in his hand …Read more.