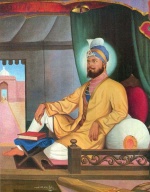 On March 14, which is also the Nanakshahi New Year and the first day of the month of Chet, the Sikh community worldwide celebrate the Gur Gaddi (Guruship) of the seventh Sikh Guru, Guru Har Rai.

Guru ji was the son of Baba Gurdita ji and Mata Nihal Kaur ji. Baba Gurdita was son of the sixth Guru, Guru Hargobind. Although, Guru Har Rai Ji was a man of peace, he never disbanded the armed Sikh warriors (Saint Soldiers), who earlier were maintained by his grandfather, Guru Hargobind.