Difference between revisions of "Template:AOW296" 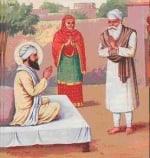 BIBI AMRO was the daughter of Guru Angad, the second Sikh Master. It was her and Mata Khivi, her mother, the noble Sikh women who deserve the credit of attracting Amar Das, an idol worshipper, to Sikhism.

As a result, enabling him to become Guru Amar Das, the 3rd Master. Thus she was an indirect instrument in the early development of Sikhism.

She was born in 1532 at village Khadur near Amritsar. She had two brothers, Dassu and Datu, and one younger sister named Anokhi.

She received her early education directly from her parents. Guru Angad Dev taught her, along with the other children, to read and write in Gurmukhi script, which he had revised and simplified.

She also learnt many sacred hymns from her father. Writer of the "Bansawali Namma" tell us that she had learnt by heart sacred hymns like ‘Sidh Goshat’ and others. She had been gifted by nature with a sweet voice. In short, she was a talented girl. .....More