Difference between revisions of "Template:AOW23" 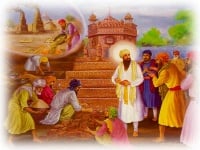 Dasvandh or Dasaundh, literally means a "tenth part" and refers to the practice among Sikhs of contributing in the name of the Guru one-tenth of their earnings towards the common resources of the community. This is their religious obligation — a religious requirement or duty; a form of seva or humble service which is highly valued in the Sikh system. The concept of dasvandh was implicit in Guru Nanak’s own Gurbani in the line: "ਘਾਲਿ ਖਾਇ ਕਿਛ੝ ਹਥਹ੝ ਦੇਇ ॥ ਨਾਨਕ ਰਾਹ੝ ਪਛਾਣਹਿ ਸੇਇ ॥੧॥ One who works for what he eats, and gives some of what he has - O Nanak, he knows the Path (1)" (SGGS p 1245) The idea of sharing and giving is symbolised by the institutions of langar (community kitchen) for the sangat (holy assembly) that the Guru has established.

In the time of Guru Amar Das, Nanak III, a formal structure for channelizing Sikh religious giving was evolved. The Guru set up 22 manjis or districts in different parts of the country, each placed under the charge of a pious Sikh who, besides preaching Guru Nanak’s word, looked after the sangats within his/her jurisdiction and transmitted the disciple’s offerings to the Guru.

As the digging of the sacred pool at Amritsar and the erection in the middle of it of the shrine, Harimander sahib, began under Guru Ram Das entailing large amounts of expenditure, the Sikhs were enjoined to set apart a minimum of ten per cent (dasvandh) of their income for the common treasury pool, Guru key Golak (q.v.). .....More