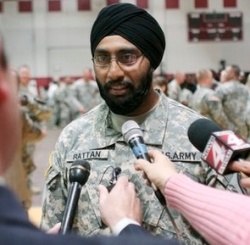 Aside from a striking physique, Capt. Tejdeep Singh Rattan is not what you would visually expect from a U.S. Army Soldier. Rattan, a 31-year-old devotee of Sikhism, was granted special exemptions last year (2010) regarding Army Regulation 600-20 that permit him to wear a beard and a turban while in uniform to comply with the religion of his youth and native Punjab, India. Soft-spoken and intensely religious, Rattan takes great pride in himself and his faith for what he has accomplished.

"I'm very proud to be here," said the post's newest dentist. "I believe I did a good job by asking (the Army) for permission, because a lot of (Sikhs) assimilate right away and then regret (it) afterwards and cannot live with themselves.

"My life runs on - my fuel is - my faith," he continued. "I've lived with it all of my life. So I made a very honest appeal to the U.S. government. There's nothing (Sikhs) cannot do with our articles of faith intact."

Rattan completed the Army's Basic Officer Leadership Course in March and chose Fort Drum as his first duty station. He reported to the newly built Stone Dental Clinic last month. There is one other Sikh Soldier entering active duty this summer who, along with Rattan, secured exceptions to Army regulations. It marks the first time the Army has allowed Sikhs to retain their expressions of religious devotion since visible articles of faith were officially prohibited in 1984.

Rattan feels compelled to educate the Army community on the tenets of Sikhism and other little-known facts. For example, Rattan said, 99 percent of those who wear a turban in the U.S. are Sikhs. "There are about 25 million (Sikhs) in the whole world, which is very insignificant," he said. "We are a people who are not explored yet. We're very quiet people."

Sikhs tradition in the military 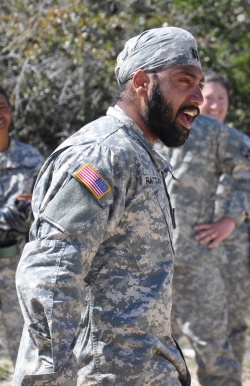 Rattan said Sikhs, known for their martial prowess, compose more than half of the generals in India's military. He said serving in the U.S. Army is his way of giving back to the community.

"I'm a very proud man," Rattan said. "I'm living what Sikhs believe in, which is service for others ... and this is the best place to do it, with the military."

"There was a time with the Indian family lifestyle when every household had to give one son to go fight," he added. Rattan comes from a wealthy family in northern India. He immigrated with his family to Ohio in his teens and fell in love with the opportunities he found in the U.S., especially educational.

He remained here while his parents eventually returned to India, where his mother teaches and his father, also a doctor, teaches at a government medical school.

Rattan said his parents visit him two or three times a year.

"Chances are," he said, "Soldiers are going to be seeing my parents taking a walk on the street, whenever they get here. So there will be another turban man walking around."

Army happy to have Rattan

Col. Roger Fiedler, Fort Drum DENTAC commander, said he is happy to have Rattan aboard. "While his dental skills are the same as any other dentist," Fiedler said, "his unique status as a practicing Sikh U.S. Soldier and dental provider add to the diversity that makes our military so strong."

Rattan said he is technically a biomedical engineer, and that he is interested in one day designing and installing his own artificial oral implants.

"I always believed the fact that the more educated you are, (the better off you are)," Rattan said. "There's always time to learn more, which is a basic principle of Sikhism. You never stop learning. You learn every day." Rattan said he hopes for a future Army that will continue to embrace tolerance and diversity.

"I can definitely envision right now that we are heading in the right direction, for sure," he said. "We need folks of different kinds of backgrounds, different kinds of education, who can make us grow, and not go down. "Tolerance, I believe, is a key for everything."