Difference between revisions of "Sirsa" 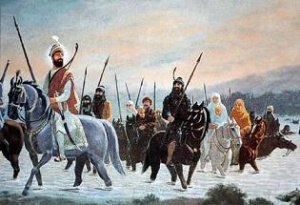 This is the river near Anandpur Sahib which hindered the Sikhs path away from Anandpur and the Mughal army in December 1705.

At present, the Sirsa River enters Himachal Pradesh state in the Solan District near Baddi and flows straight into Punjab and finally meets Sutlej near Ropar. The major tributary of the river is Balad Nadi at Baddi and Chikni Khad near Nalagarh with minor tributaries as Chotta Kafta Nallah, Pula Nallah, Jattawala Nalla, Sandholi Nallah, etc. in Baddi Bartotiwala region.

The ground water level in the valley of River Sirsa is shallow and varies on an average from 5.5 meters to 6.3 meters near the riverbed and increases towards the hills. The tributaries like Balad Nadi, Ratta Nadi remain dry except during monsoon season and ground water is the only water source for domestic, agricultural and industrial use