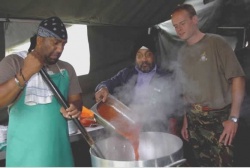 Members of the Sikh community cooked up a storm at Fulwood Barracks to raise cash for soldiers. The World's Biggest Curry Lunch event raised money for the Army Benevolent Fund, which supports serving and ex-soldiers and their families.

Gulab Singh, who helped to organise the event, said: "There is a strong association between Sikhs and the armed forces, particularly during the First and Second World Wars, in which thousands of Sikh soldiers lost their lives. It is important we remember their contributions and support events similar to this to promote cohesion."

HOT STUFF: Members of the Sikh community and army chefs prepare the huge curry at Fulwood Barracks to support the Army Benevolent Fund