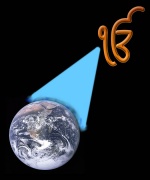 Equality, non-discrimination, true justice, and worship of only One God, are basic values that are well-known and gave the world a simple and universal faith.

Today, some 540 years after the birth of the founder of Sikhi, Guru Nanak, it has more than twenty two million followers, and is the fifth largest faith in the world.

For the Gurus promoted all human beings as one and the same, and they are all above discrimination. The Gurus showed real love for all of humanity. Muslims were equally dear to them as Hindus, or any others. It is well known that Bhai Mardana a Muslim, spent his whole adult life with Guru Nanak, accompanying Guru with his Rabab as a musician and the Guru's closest companion everywhere that the Guru went. .....More