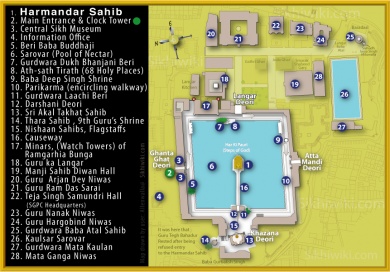 Plan of the Harmandar Sahib Complex,
click on the plan to enlarge (by user:allenwalla)

Over the years the city has come to be known by the name of the Holy pool in which the Harmandar Sahib stands. Located in the center of the huge "Amritsar" (the pool of nectar) the Harmandar (sanctum sanctorum) symbolizes the synthesis of nirgun and sargun (the spiritual and temporal realms of human existence) for the Sikhs.

The "Mandar" is reached by a causeway from the `swarg dwarn' or Darshini Deori (gateway). .....More